A TGV train from CDG to Disneyland® Paris offers a direct, high-speed train (200mph) connection between CDG Airport Terminal 2 and the Disneyland Paris park gates in less than 12 minutes with ticket prices as little as 35€.

Already in Paris and need to get to Disneyand Paris? See the Paris Disneyland train (RER) article.

This article explains how to:

The TGV train schedule from Charles de Gaulle Airport (CDG) to Disneyland Paris has the first train departing at 06:54 in the morning with the last train in the evening departing CDG at 21:55. The frequency of trains varies from 30 minutes to 1h20 between each departure from CDG.

Charles de Gaulle Airport has two separate train stations, one located near Terminal 3 and another located within Terminal 2. The Terminal 2 train station, known as “Aeroport Charles de Gaulle 2 – TGV“, is split into two distinct sides, one for RER suburban trains (going to Paris city center), the other TGV high speed intercity trains, one of which travels to Disneyland Paris.

Within the photo guide for the Terminal 2 train station is a photo of the TGV (Grandes Lignes) ticket purchase office on the bottom floor (shown below). This office is split into two sides, one side sells tickets for Paris city trains (RER B) and the other side sells intercity Grandes Lignes trains tickets, which includes TGV trains to Disneyland Paris. If you’re facing the ticket office, the entrance on the right half is the one you’ll want to use to purchase or pickup your Internet bought tickets, as seen in the photo below: 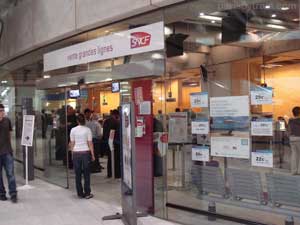 To buy TGV tickets for the CDG to Disneyland Paris train in advance online go to www.sncf-connect.com. This link will show the current day’s schedule of CDG Airport to Disneyland Paris TGV trains which likely isn’t very helpful, but you can adjust the departure date on the following page. Just click on any of the “Reserver” buttons along the right side of the page. 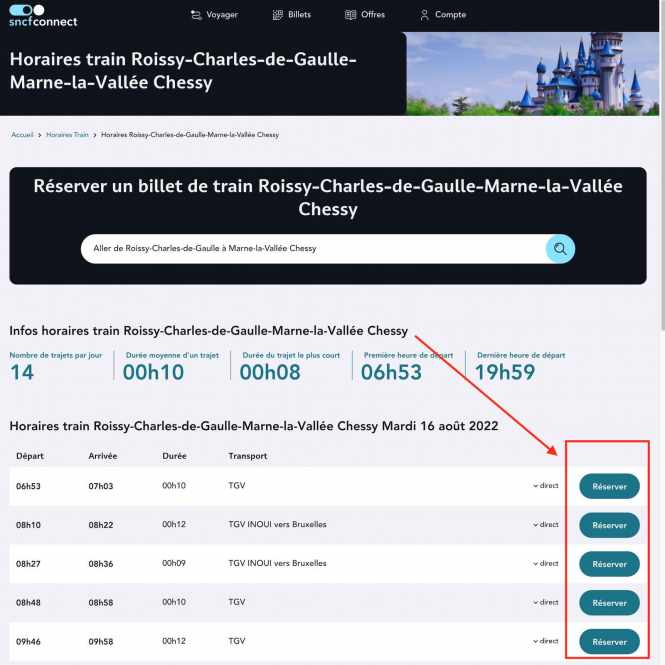 DO NOT CHANGE THE COUNTRY/LANGUAGE OF THE WEBSITE to “European” in the bottom right hand corner of the website (yet) from the above shown page. This will prevent you accessing the next page of the purchase process of TGV tickets from CDG to Disney. Leave the website location setting (Choix du pays) as France.

DO NOT CHANGE (YET)

On the following page (shown below), feel free to change the country location to “Europe” to see the website in English if you wish.

The “Reserver” page will look like the page below, with a “départ” or “departure” drop-down selection at the top right corner. Here you can change the date of TGV trains departing CDG Airport Terminal 2 TGV train station. 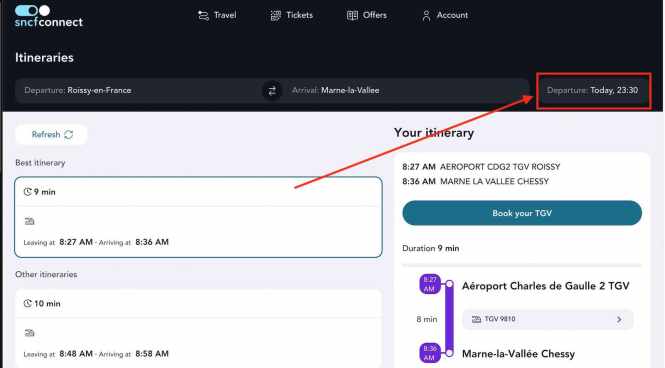 After setting your departure date, select a train schedule from the list on the left (travel time should be 8-12 minutes for TGV trains) and click on button “Book your TGV” (“Reserver votre TGV” if in French) on the top right.

Next you’ll add passengers and their ages to your booking then click “See Prices” button: 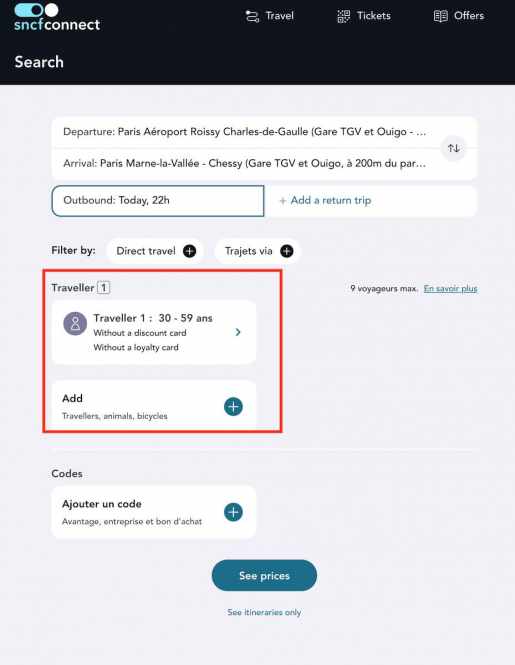 Next, choose a class (2nd or 1st) and price, then you’ll be asked to confirm your ticket conditions such as “no modifications” (no exchanges) or “modifiable”: 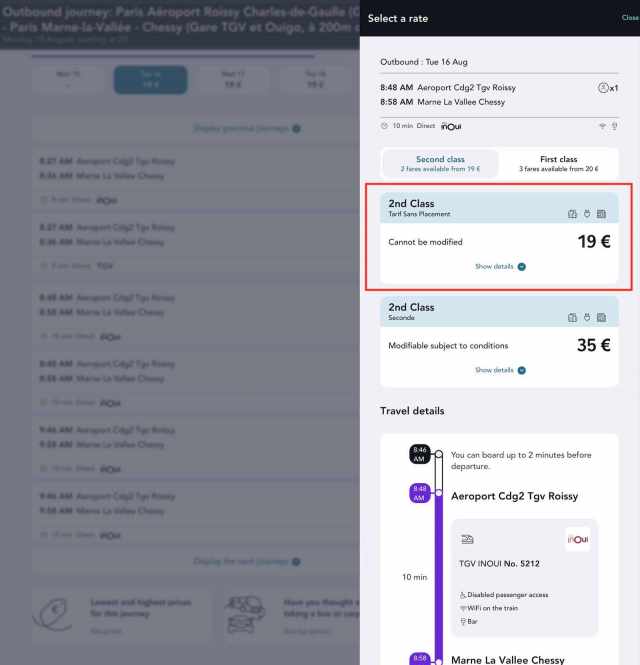 Next you’ll confirm your ticket conditions and choose seat preferences (aisle/window/next to friend). Then you’ll Validate your basket of tickets, provide passenger name, date of birth, and email and mobile phone contact information and then click Validate and Pay and finally you’ll be asked for credit card information to complete your TGV CDG Disney train ticket purchase: 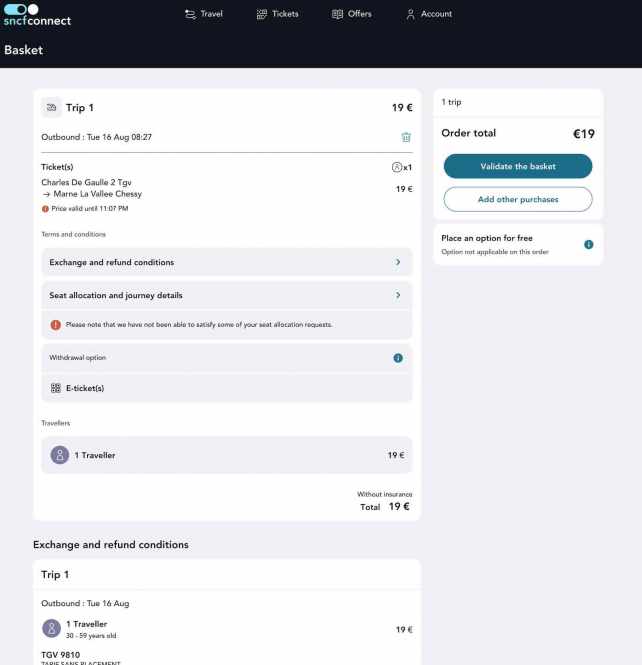 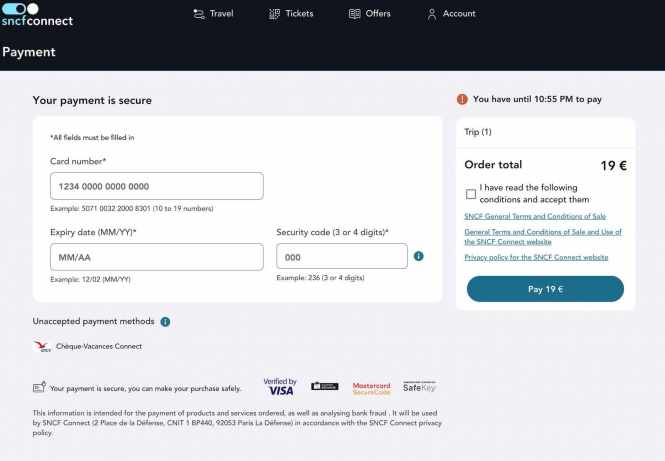 To collect your CDG to Disney TGV train tickets you’ll have these options: 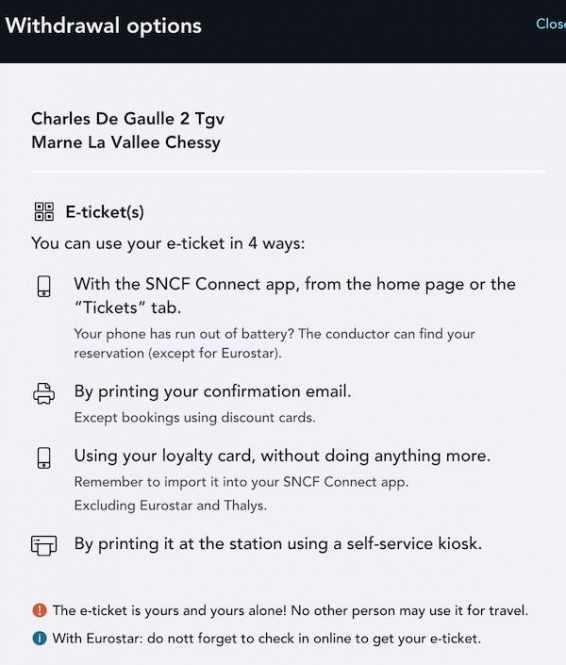 If you decide to print your tickets at a self-serve kiosk at the train station, bring the credit card with which you made the ticket purchase and also the confirmation email containing the reservation information. The self-serve ticketing kiosk machines will appear similar to these below with perhaps different colors: 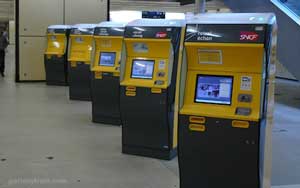 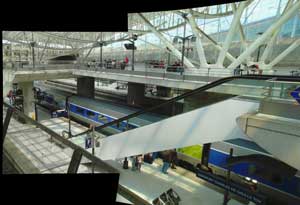 After your TGV train departs, the first stop will be Marne La Vallée–Chessy station which is the train station serving Disneyland Paris. The travel time should be roughly 10 minutes from CDG to Disneyland Paris.

Below is a photo of the Marne La Vallée–Chessy train station (on the left) within the Disney grounds.