Paris and the surrounding area is divided into 5 circular fare zones for use in pricing public transportation passes. Paris Metro zones don’t actually apply to the Paris Metro (subway/underground) itself. Paris Metro trains are a single zone even if the Metro line crosses into zone 2 or zone 3. Paris zones apply to transit passes used on RER trains and Transilien trains to Disney, Versailles, airports, etc. By default Navigo Decouverte passes are 1-5 zone. Other passes like Paris Visite and Navigo Jour day pass have several fare zone options, like Paris zone 1-3 or Paris zone 1-5. Examples of popular destinations and their zones: 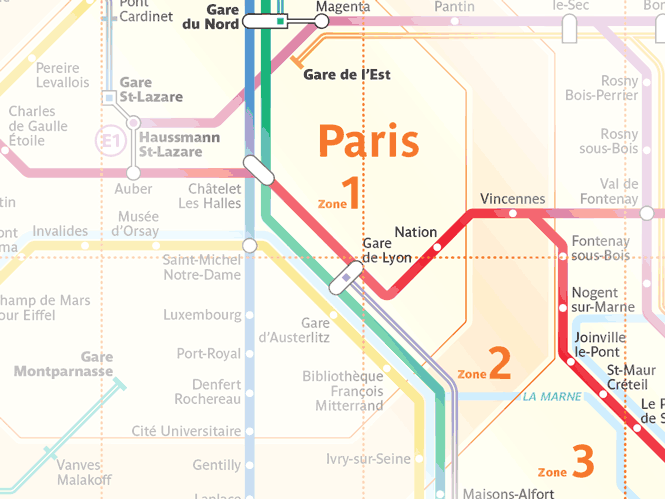 Paris Metro (urban city subway) is all a single zone although it has stations in both Zones 1-2 as shown on this more detailed zone map including Paris Metro, RER and Transilien (intercity) trains (900KB PDF, opens a new window).  Paris Metro tickets are valid for travel anywhere within Zone 1 and all of the Metro system is a single zone requiring only a single Metro Ticket / Ticket t+ (even if the Metro station you’re at is outside of Zone 1, I realize this is confusing).  Be careful at La Défense when exiting the Metro area.  Be sure to use the Metro exit and not the RER exit, both of which will generally be available to you due to fences which may be opened at particular times.  A RER ticket is required to pass through RER exit turnstiles, while the Metro exit will not require a ticket.

What’s visible on the Zones map: 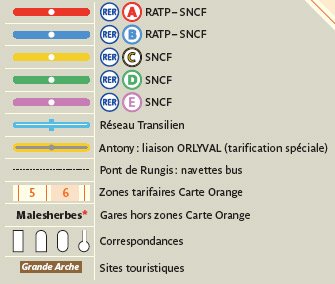