The Paris RER train are 5 express train lines connecting Paris city centre to surrounding suburbs. In Paris the RER acts as an express underground or subway train. Beyond Paris city centre, the Paris RER is a ground level commuter train connecting outlying suburbs and popular destinations such as CDG Airport (RER B), Disneyland Paris (RER A) and Versailles (RER C) to the heart of Paris. 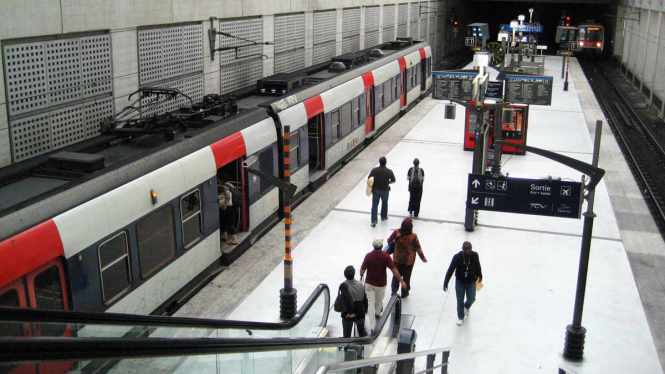 The RER Paris has 5 train lines:

The public transit authority of Paris (RATP) offers multiple RER maps that can be downloaded here:

Paris RER trains operate as a scheduled service, unlike the Paris Metro.

Here are some examples of first and last Paris RER trains to popular destinations:

Full Paris RER Timetables for download and print can be found here:

Paris RER schedules can be confusing to read. Here are some instructions on reading Paris RER train timetables.

Paris RER trains use two different types of tickets depending on which part of the RER network you will be traveling. When taking a RER train strictly within central Paris Zone 1 (visible in the first RER Map), you can use basic Paris Metro tickets for travel on the RER. Travel beyond Paris Zone 1 on the RER requires a special ticket: a Billet Ile-de-France.

Paris RER tickets (Billet Ile-de-France) are similar to the one shown here:

Paris RER ticket prices are determined station to station for travel beyond Zone 1 and range from 2.10€ to upwards of 14.10€. Some example trip RER fares (prices valid as of January 1, 2023):

As of March 1, 2022, RER tickets (excluding airport routes) now have a price ceiling of 5€. The maximum price of a RER ticket, regardless of distance, will be 5€.

Tickets for the Paris RER can be purchased at any RER or Metro station ticket window or ticket vending machine. Paris Metro ticket machines can appear like the following: 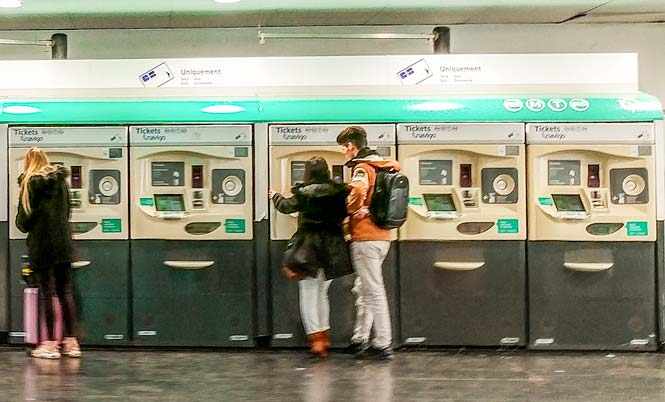 Metro ticket vending machines may also be white or purple in colour. The above bank of ticket machines in particular only takes credit card and debit card payments, but normally coins are accepted at the vending machines.

Paris RER ticket vending machines may appear like the following: 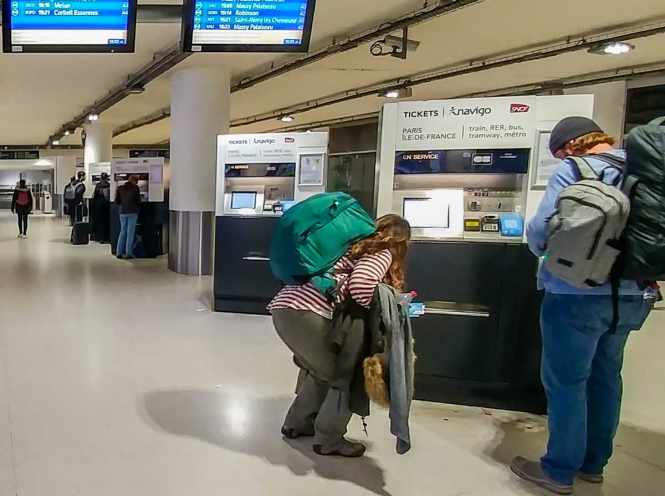 These machines are known as Billetterie Ile-de-France and can also be blue in colour. 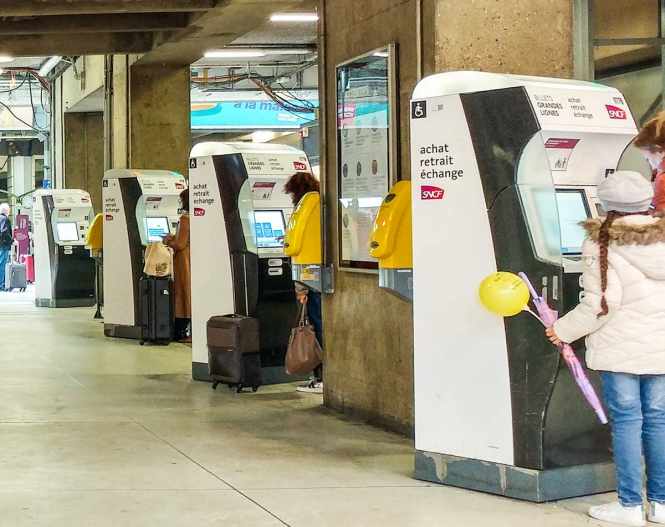 Paris RER travel passes (known as Pass Navigo) are subject to fare zones, split into either an all zone pass (the default which includes zones 1 through 5) or sub-zone passes excluding central Paris (zones 2-5, 3-5, 4-5), which determine the price of the multi-use pass or ticket. The above transit passes are valid for travel not only on RER trains, but also on the Paris Metro and Paris Buses, Trams & Transilien trains within the fare zone you have purchased.

This particular day ticket is valid for zones 1 & 2 (the minimum possible), which as of Jan. 1, 2023 costs 8.45€. Mobilis tickets can be bought in various zone coverage, from 1-2 zones to 1-5 zones covering CDG/ORY airports and Disneyland. Note the writing spaces on the top left hand corner? To be valid for travel those fields should be completed in ink with: date in format dd/mm/yy (Valable le), last name (NOM), and first name (Prénom).  Read more about the Ticket Mobilis day tickets.

Navigo Jour Day Pass is another option for unlimited rides for a day on Paris RER trains. Navigo Day passes are put onto the same card as Navigo week passes. The price for Navigo Jour Day pass is now the same as Ticket Mobilis day tickets and have the same coverage options, from 1-2 to 1-5 zones, with access to Paris Airports CDG and ORY. Read more on the Navigo Day Pass page.

Remember to complete the blank lines of requested information on the ticket coupon before using the Paris Visite ticket, which is last name (NOM), first name (PRENOM), first use date (DU which means “from”) and valid until (AU which means “to”) with a format of: dd/mm (day before month).

Paris RER week passes are known as Navigo Decouverte (a physical card) that must be purchased along with a week long “subscription”, such as Navigo Week or Navigo Semaine in French. The Navigo week pass provides unlimited travel within certain zones, all 1-5 Paris Fare zones by default. You can choose smaller zones outside central Paris, such as zones 2 to 5, 3 to 5, 4 to 5, if you were travelling only from say a Hotel near Disneyland at Val d’Europe and Disneyland Park, which a Navigo 4-5 zone would cover. The physical Navigo card itself costs 5€. The Navigo Week price is 30€ on top of the 5€ card fee.

A standard 1-5 zone Navigo Decouverte covers popular destinations like CDG Airport and Paris Disneyland, both in Zone 5 and Versailles Chateau in Zone 4.  (Prices current as of Jan 1, 2023.)

This week pass system works strictly from Monday start of service, till Sunday end of service, not an arbitrary seven day period. If you arrive in Paris on Thursday, you have until midnight to purchase a Navigo week subscription. Starting on Friday, passes for the following week (valid starting Monday morning) will be on sale.

The Navigo Decouverte pass is a radio frequency (RF) card roughly the size of a credit card and has no identifying information on it: 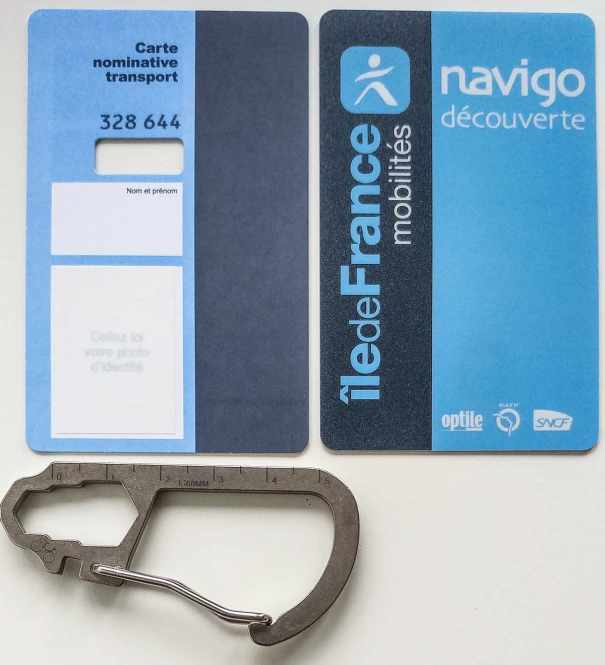 Each plastic Navigo card also comes with a paper identification card which is meant to hold your hand written name and a face photo of the traveler measuring 3cm tall by 2.5cm wide. Note that some Paris Metro ticket agents request that you use a color photograph as opposed to black and white, although this isn’t stated in the rules & regulations.

The paper identification card has a peel-off sticky spot to hold your photo in place. You should already have a photo with you when purchasing the Navigo Découverte card at Metro or RER ticket windows. The photo should be color, either professionally done or home printed and trimmed to the required 3cm x 2.5cm size. Automated, coin operated photo booths can often be found in larger Metro, RER and train stations within Paris, charging roughly 5€ for 4 photos. Paris transit ticket window workers often have scissors handy for trimming your photo for use on the Navigo card.

Some restrictions apply to the use of the above passes:

The look of Paris RER stations signs vary. Below are photos of several RER station signs: 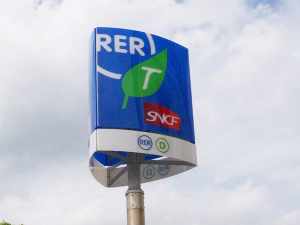 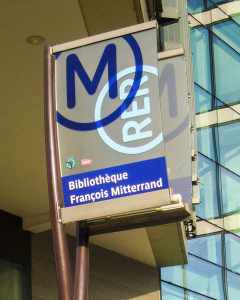 Combined Metro RER stations are common throughout central Paris and are often marked with signs showing both Paris Metro and Paris RER symbols like the photo above. 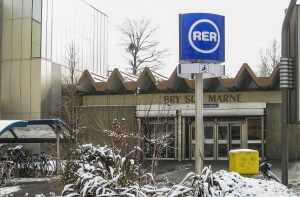 When several RER train lines are served at a single station often the RER sign shows which RER lines are at the station like in the above photo. 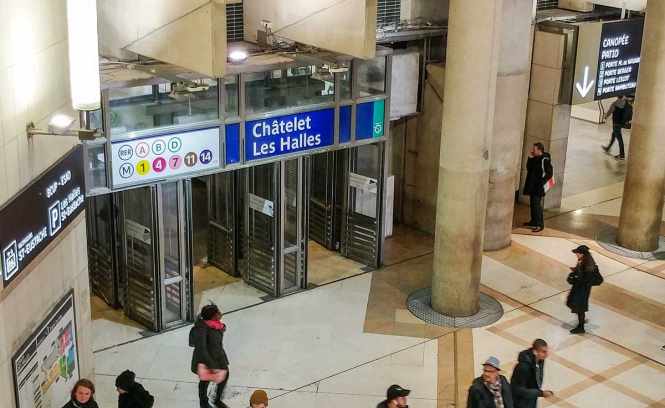 RER stations in Paris can also be found within large train stations (gare) such as Gare du Nord. Here is an example of a combined Transilien & RER sign at Gare du Nord showing lines RER B, D & E: 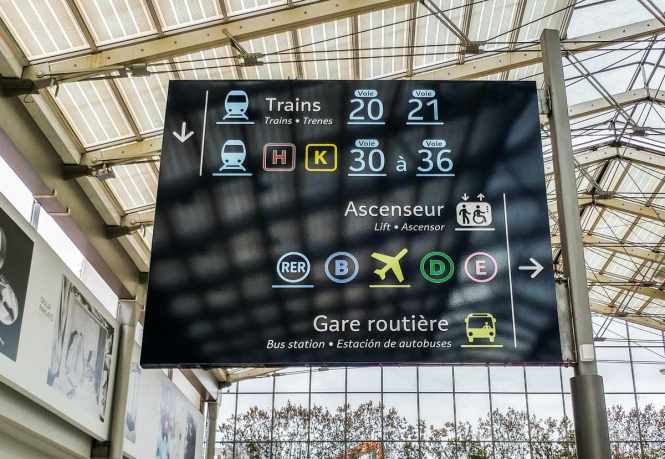 Inside of a RER train station, access to the train platforms is restricted by the use of turnstiles or double door gates. Below is a photo at Auber Paris RER station of turnstile barriers accepting both paper tickets and Navigo passes: 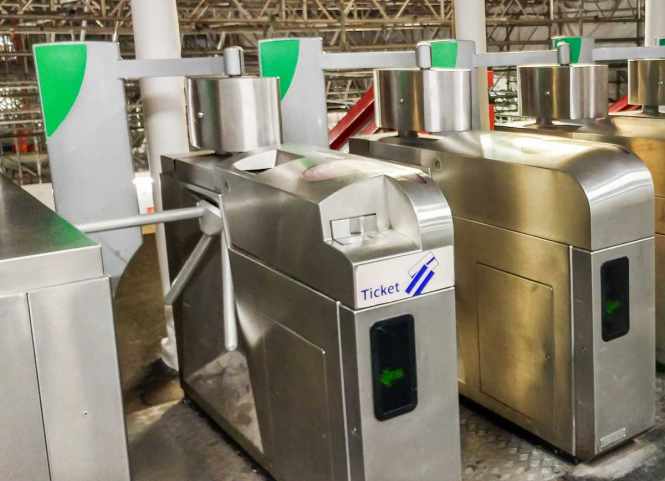 Below is a photo of gate style barriers in use at Paris RER station Marne la Vallée Disneyland: 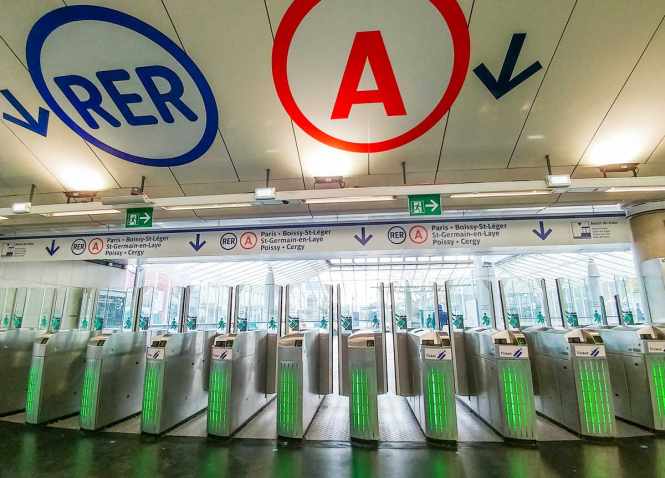 Things to note in the above RER station turnstile/barrier photo:

Once past the turnstiles you need to make your way to the correct Paris RER platform where you’ll be able to board the train. Within RER stations, signs will note lines along with direction of travel, which is denoted by the final or terminus station for the line. Here is an example Paris RER A sign: 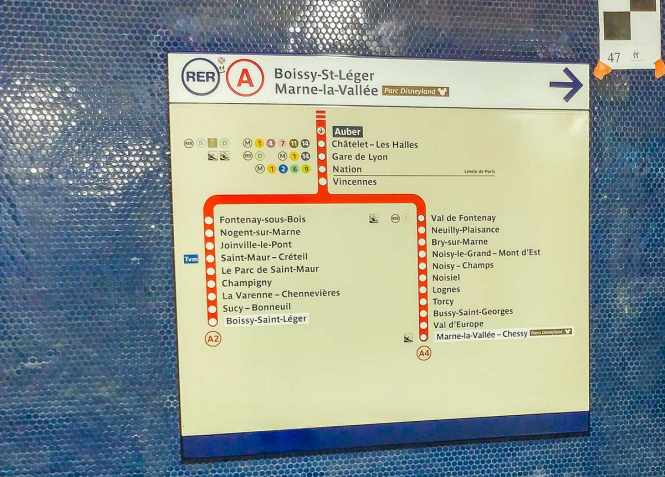 Things to note in the above photo:

On the train platform you will find overhead station panels such as this: 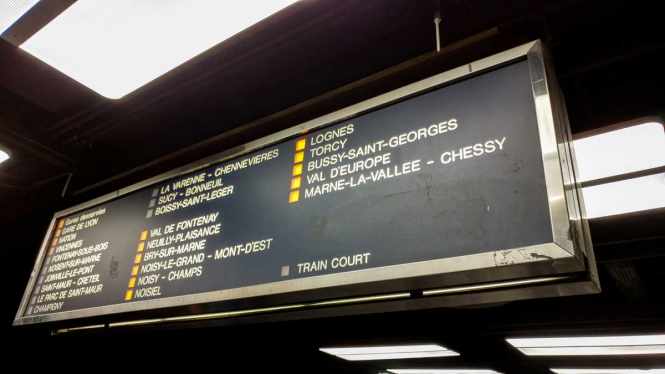 Things to note about the above RER station panel:

Below is another example of a newer overhead RER B station stops panel. 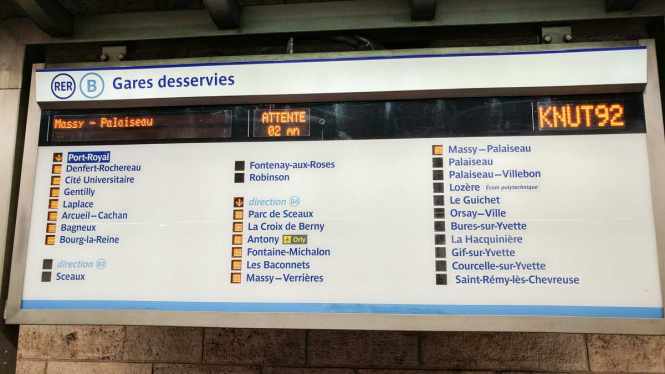 Paris RER train doors do not open automatically. Whether you’re getting on or getting off, you’ll need to activate the train car doors through a button located on the handle near the middle of the double doors (unless someone pushes the button first).

On board the RER train itself, there will often be folding seats near the doors themselves, which should be used only when there is room to do so. Obviously at rush hour, these seats should remain up to allow as many passengers board the train as possible. 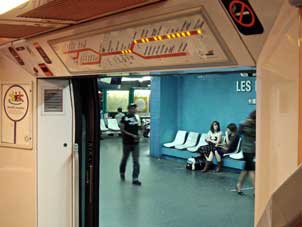 Upon arriving at your desired RER station, you need to alight the train car (remembering to open the door using the button) and make your way past the turnstiles and barriers. RER stations often require the use of tickets and passes while exiting RER stations, using the same turnstile barriers as when entering, but in reverse. This is a measure against travelers paying less than the appropriate fare for their travel. There is little preventing passengers from buying a lower cost fare, boarding a RER train and riding it beyond the fare’s validity. Forcing riders to use their tickets or passes to exit RER stations and random checks by ticket controllers, doling out penalty fares of around 35€ per infraction, are the few measures against improper use of the RER.

Many Paris RER stations have multiple exits (sorties) which can be up to ten minutes walk apart (such as at Chatelet Les Halles). Exit maps can be found near station exits which help you get your bearings before leaving the station. Exits will be marked in blue and often have a number and exit number associated with them: 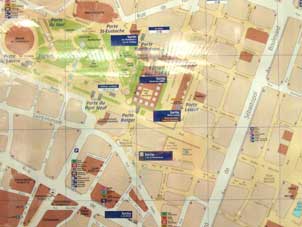 What time does the RER Open?

How often does the RER run?

The RER runs from 6 minutes to 15 minutes between trains during rush hour and off-hours.

What time is the first RER B?

Can I buy RER tickets at Metro stations?

Yes, you can buy RER tickets at any Metro station ticket office.

If you have questions about the Paris RER information presented here, don’t hesitate to ask for help on the Paris By Train Questions and Answers page where I or some other knowledgeable traveler will get back to you with an answer.