This is a guide on how to read Paris RER train schedules, which can appear complex at first glance.

We’ll learn how to read an RER timetable through an example trip: Paris-Gare de Lyon to Disneyland Paris by RER A Train.

Things you’ll need to know before you start:

To see all RER train lines use a RER train map. To get detailed information on a single RER line, view its corresponding RER line map, which can help you find a departure station in Paris (Zone 1), the destination station, and the line branch/direction you need.  RER Schedules can be found on the RER Schedules category page.

Step 2 – Find Desired Time of Arrival: On the row for your destination station, trace your finger along the row until you find the time you want to arrive at. Subsequent pages will have later times, so flip through the schedule book to find later arrival times.  If the time you’re looking for isn’t shown on the current page, view subsequent pages, keeping your focus on the row of your destination station, in this example, it’s Marne la Vallee, which is easy since it’s the last row/station along the RER A line.  Once you’ve found the time you wish to arrive at we can now find when the train leaves and from which stations.  Note that all times are listed in 24 hour clock. Thus 1731 would be 5:31pm in the afternoon.  Morning times are shown without a leading zero, so 6:55am would be shown as 655.

Step 3 – Find Departure Station & Time: Having found your desired arrival time, we can now check when the train departs and from which Paris stations.  Each column on a RER timetable represents a train running along the line, albeit at different times.  Moving to the right across columns shows trains that depart later in the day.  Not all trains stop at all stations along the line, thus you’ll see large gaps in the schedule, which indicates a branch or stations of the RER line that is skipped by the train.

From your chosen arrival time, trace your finger up the column till it crosses the station row that you want to depart from.  Paris stations are near the middle of the sheet. The major RER A stations in central Paris are: Charles de Gaulle-Etoile, Auber, Chatelet Les Halles, Gare de Lyon, and Nation. Here we move up the column till we reach a 6:54am departure which coincides with station Gare de Lyon.  Thus we can take an RER A train, in direction Marne La Vallée, leaving from Gare de Lyon at 6:54am, arriving at 7:30am at station Marne La Vallée-Chessy, the closest station to Disneyland Paris.

The following PDF file, How to Read Paris RER Train Schedules, is the same guide on how to read RER train schedules, with Paris to Disneyland Paris as the example trip along the RER A line. 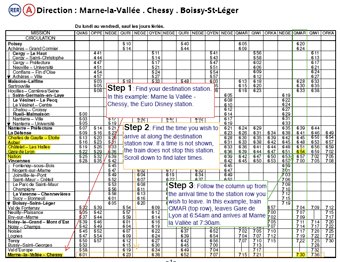 How to Read an RER Train Schedule / Timetable was last modified: October 28th, 2019 by Ben

One thought on “How to Read an RER Train Schedule / Timetable”