This article explains the basics of taking a RER B airport train from Charles de Gaulle Airport (CDG) to Paris city center.

CDG Terminal 2 to Paris by train 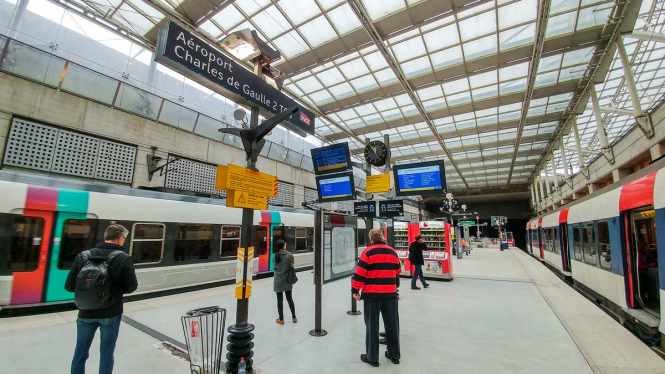 Safety/Security: Thieves work on this train!

About the RER B Train

The RER B train from Charles de Gaulle to Paris runs north-south through the centre of Paris with many going from CDG to Gare du Nord, the London to Paris Eurostar station, then at Châtelet Les Halles the “super” exchange station with 4 Metro lines and 3 RER lines available, then Saint Michel/Nôtre Dame, Luxembourg, Port Royal, Denfert-Rochereau, Cité Universitaire, and continues south towards Orly Airport (requiring a transfer onto the OrlyVal train at station Antony). 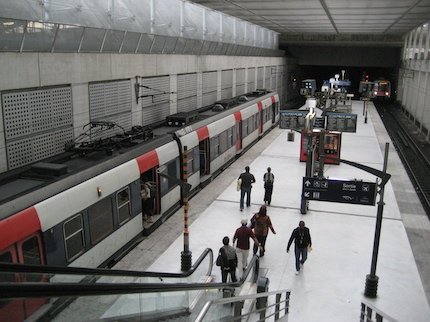 The first RER B CDG airport train leaving Charles de Gaulle Airport towards Paris departs CDG Terminal 2 train station at 4:50 a.m.. This RER B train then stops at “Aéroport Charles de Gaulle 1” station two minutes later to pick up more passengers from CDG Terminal 1 & Terminal 3. Then the RER B train will continue its journey south towards Paris to arrive at Gare du Nord at 5:26 a.m.

The last train leaving airport CDG for Paris departs at 11:50 p.m. just before midnight (update: see disruption above), arriving at Paris Gare du Nord at 12:26 a.m. This train schedule from CDG to Paris is the same every day of the week, including holidays.  (For a complete timetable, see the schedule of RER B trains).

For normal first and last train times see this timetable of first/last Paris Metro and RER A and RER B trains.

If you land at CDG Terminal 1 you’ll have to take a shuttle train called CDGVAL to Terminal 3 / Roissypole to catch the RER B train to Paris:

Below is a photo close up of the CDGVAL line map showing Terminal 3 / Roissypole as where is the closest RER B train station to CDG Terminal 1:

If you land at CDG Terminal 1 follow signs for the Paris RER B train / CDGVAL within Terminal 1 and transfer to Terminal 3 / Roissypole to catch the RER B train to Paris.  (See more photos and details in the CDG T1 / T3 to Paris train article.)

To make things more confusing, CDG Terminal 3 / Roissypole is located between Terminals 1 and 2. If you’re traveling from west to east across CDG airport terminals you’ll depart Terminal 1, arrive at Terminal 3/Roissypole, then finally CDG Terminal 2 at the opposite end of the airport. Keep in mind that the CDGVAL shuttle also stops at parking stations in between Terminals 1 and 3 (parking lot Parc P-r), and Terminals 3 and 2 (parking lot Park P-x).  Be careful to not get off CDGVAL too early at these parking lots. There are voice announcements on board CDGVAL at each stop in French, English, German and Spanish to help guide you. 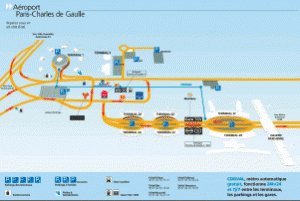 If you’re landing at CDG Terminal 2, keep in mind that there are 7 sub-terminals (2A thru 2G) and you must walk to the Termainl 2 train station which is located between sub-terminals 2C and 2E.  There will be numerous signs through the terminals pointing towards the Paris RER train. 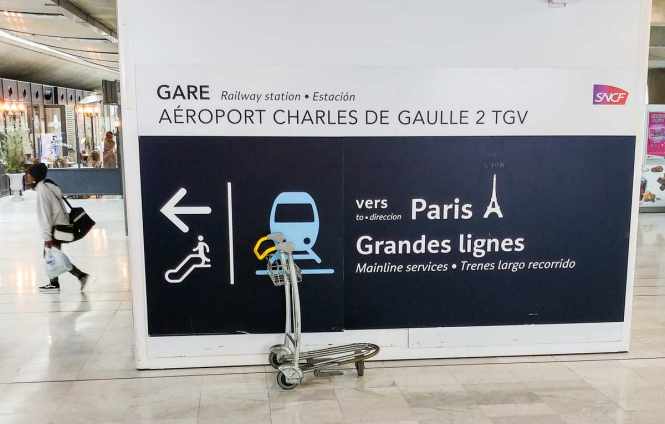 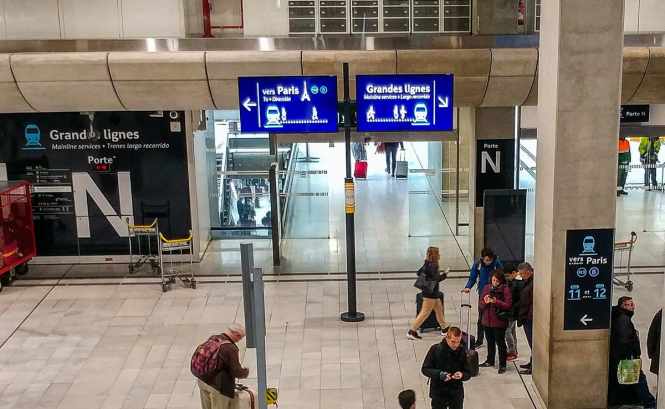 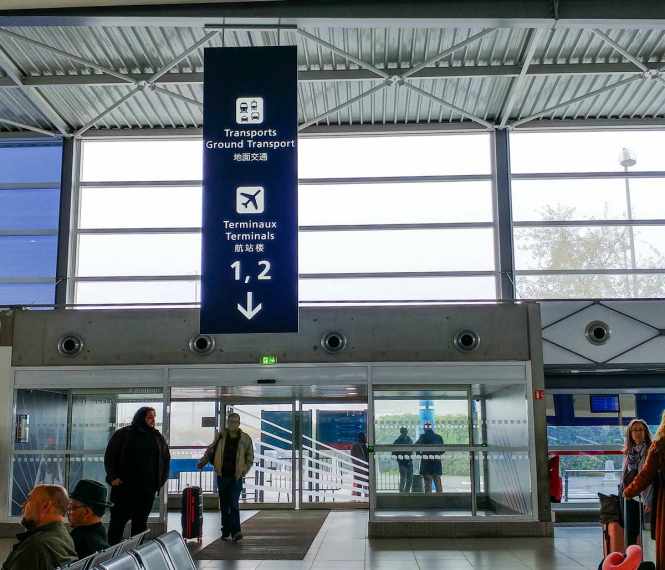 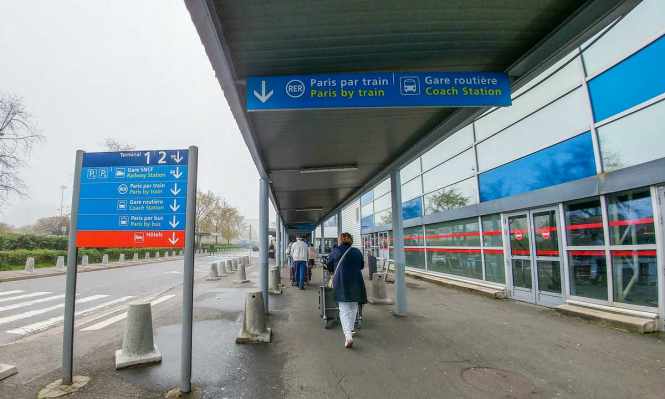 You can buy RER B Paris train tickets from either ticket booths or ticket vending machines at either the Aéroport Charles de Gaulle 1 train station (serving CDG T1 / T3) or Terminal 2 train station.

Below is a photo of the RER train ticket vending machines inside T1 / T3 airport train station as of November 2019: 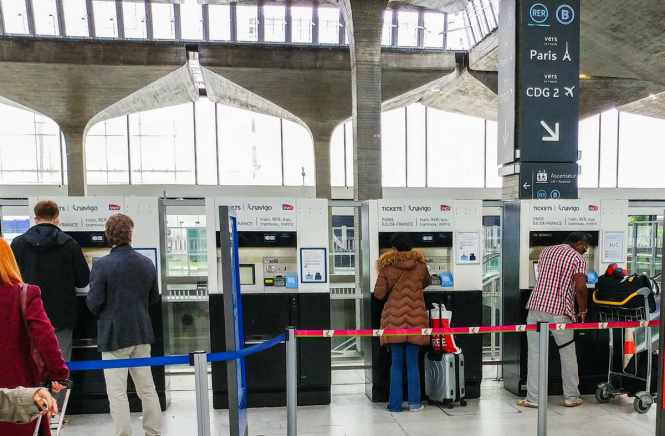 Important note: credit cards or debit cards without chip or 4-6 digit PIN numbers may not work with these machines. At the CDG T1 / T3 train station there is one large ticket window with several ticket sales staff that will be selling train tickets for the RER Train that will accept non-chip/PIN credit cards.  If you land at CDG Terminal 1 or Terminal 3 see CDG T1 / T3 to Paris by train article for more information & specific details.

If you land at CDG Terminal 2 and make your way to CDG Terminal 2 train station, there are two large train ticket offices on the bottom floor, on opposite sides.  The ticket office on one side sells Paris RER tickets, Metro tickets, bus tickets, Navigo Decouverte passes, Paris Visite etc.  This office has a sign above it reading “Billets Paris et Ile-de-France“.

The ticket office on the opposite side sells SNCF/TGV tickets if you’re traveling to Disneyland or other cities in France and across Europe.  This “Grandes Lignes” ticket office does not sell Paris train tickets or Navigo for Paris Metro / RER trains.  If you land at CDG Terminal 2, see CDG T2 to paris by train for more information and specific details.

Inside each of the ticket offices, the ticket sellers will speak English (among other languages). If you’d like to try out your French and you’re looking to buy a ticket for “Paris Aller-Simple” [Pear-Ee Alleh-Som-pleh] which is a one way ticket. The price should be roughly 10.30€ for adult tickets and 7€ for children (9 and under) for RER B train tickets to Paris ( as of June 1, 2019).

At CDG Terminal 1/3 train station the train platform will be one level below the ticketing area, visible behind & below the train ticket vending machines. To access the RER B train platform, look for the entry gates with green lights on them (detailed guide). 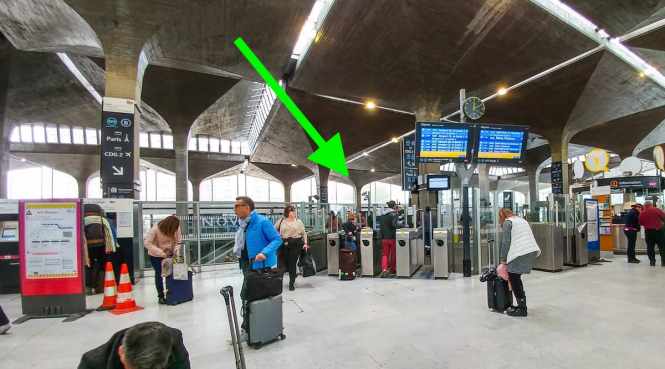 Terminal 2 CDG Train platform is also well marked: simply follow the signs that say “vers Paris” / “to Paris”. It’ll be quite difficult to miss. The RER B stations listed on the sign on the left of the below photo also mentions that all trains from these platforms travel to Paris / “Tous les trains desservent Paris“. There will be overhead display screens on the train platform listing all the station stops the RER B train will make on its journey int Paris. 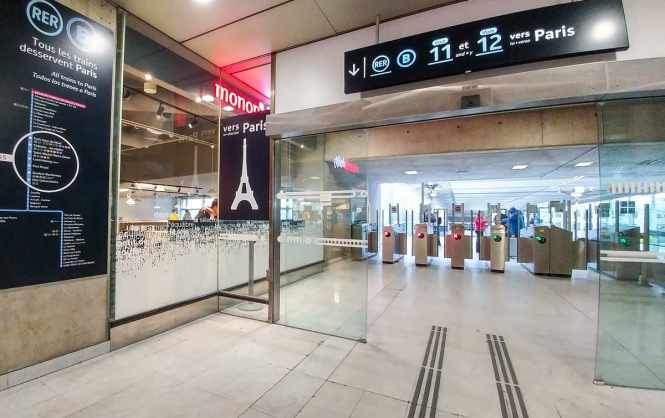 The RER B station stops inside central Paris include Gare du Nord, Châtelet les Halles, St. Michel-Nôtre Dame, Luxembourg, Port Royal, Denfert Rochereau, and Cité Universitaire.  Gare du Nord is best for those going to a hotel near Sacré Coeur/Montmarte, Châtelet les Halles for those staying near the Louvre, St. Michel-Nôtre Dame is across the Seine (the Left Bank), and Luxembourg being near the Jardin du Luxembourg (Luxembourg Gardens).

For those extra keen travelers, there are “express” RER B trains that leave from both CDG airport train stations.  The overhead display screens on train platforms will note how many station stops are between the CDG train station and the central Paris RER stations mentioned above. The express RER B train, starting at CDG Terminal 2 train station, will stop at CDG Terminal 1 Train station (Aéroport CDG 1) and then will go directly from Charles de Gaulle airport to Gare du Nord, without stopping at any stations in between. The regular RER trains will make about 9 stops in between CDG Airport and Gare du Nord. You’ll save roughly 12 minutes by taking one of the express trains, but even the non-express RER B will get you to Paris (Gare du Nord) in about 34 minutes.  See the article on RER B airport train timetable / schedule for more details on Paris airport train first/last trains, frequency and travel times.

Below is a screenshot of a RER B train timetable with an express RER B CDG to Paris train showing station stops skipped (vertical line without times) and stations served (showing times such as Gare du Nord at 8:28, Chatelet Les Halles at 8:26, etc.). 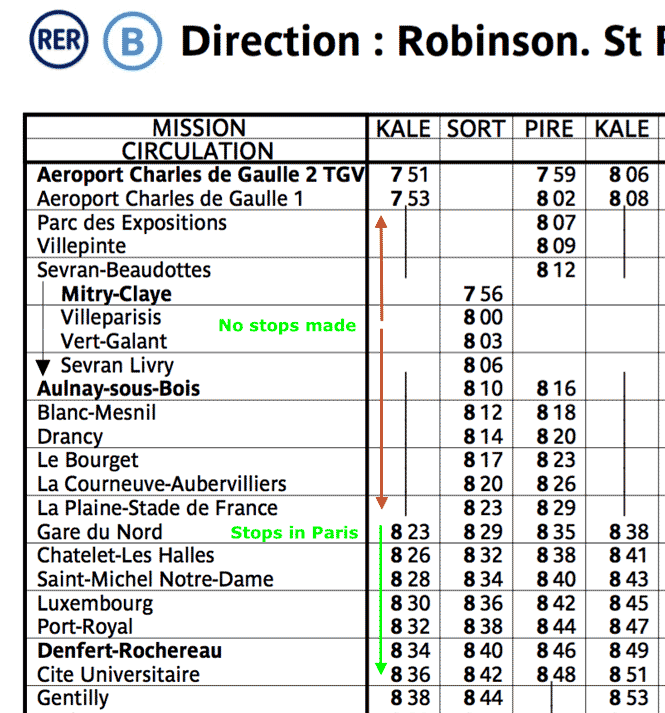 That’s it for a basic overview of taking RER B city trains from CDG to Paris. For more detailed guides for a particular CDG terminal, see the two articles linked below.

See a Detailed guide for