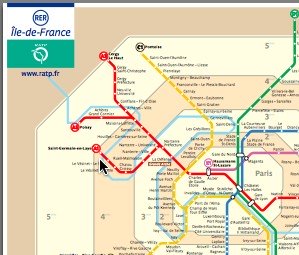 Here is a detailed RER map of RER A to RER E lines in and around Paris and its surrounding suburbs. Unlike the Paris Metro system which is all one zone (yet goes across three Zones), the Paris RER trains have 5 Zones all around the Ile-de-France, the area which surrounds Paris. It’s important your RER ticket or Paris transit pass has valid zone coverage.