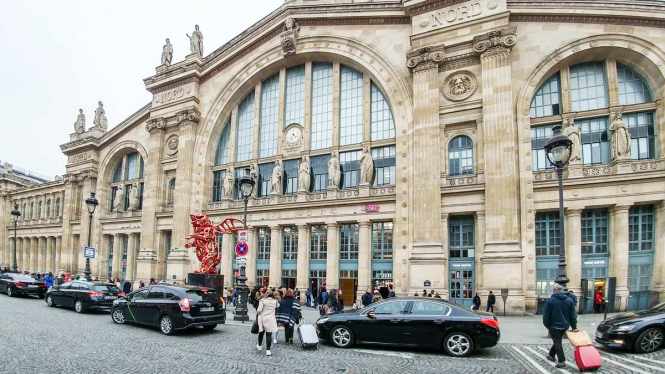 Here’s a panoramic photo of the western half of Gare du Nord showing the main train lines connecting Gare du Nord to other cities around Europe.

The horizontal layout of Gare du Nord is: 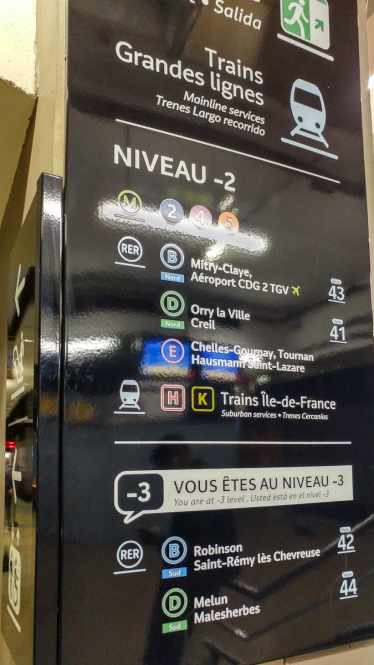 If you find yourself waiting on a RER B train platform in the wrong direction, you’ll need to return to sublevel -2 and find the correct stairwell down to the platform for RER B trains traveling in the other direction.

Above is a photo of the entrance to the Eurostar check-in area at Gare du Nord station in Paris, located up the stairs/escalators on Level 1 (Niveau 1). The Eurostar platform and trains are separated from other trains due to the need to screen passenger passports for the voyage to London. (The UK is not a Schengen zone country).

Here’s another photo of the Gare du Nord Eurostar train entrance stairs / escalators leading to the ticketing & check-in area for the Paris-London train: 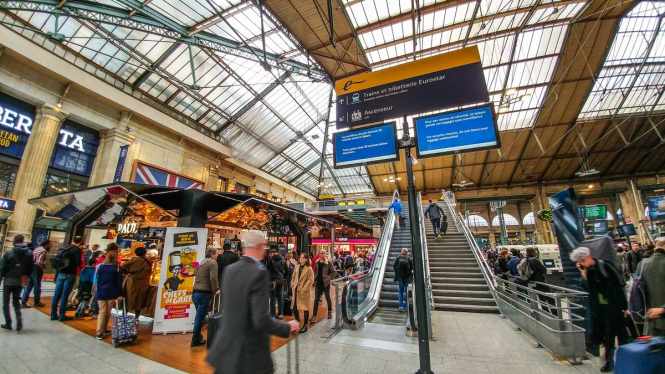 Climbing the stairs seen in the previous photo we arrive at the Eurostar ticketing & check-in level: 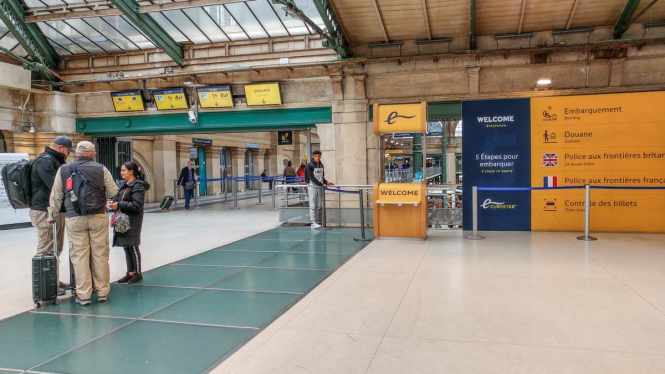 One the right side of the above photo is a large Welcome panel showing the steps to get to your Eurostar train (reading from bottom up). 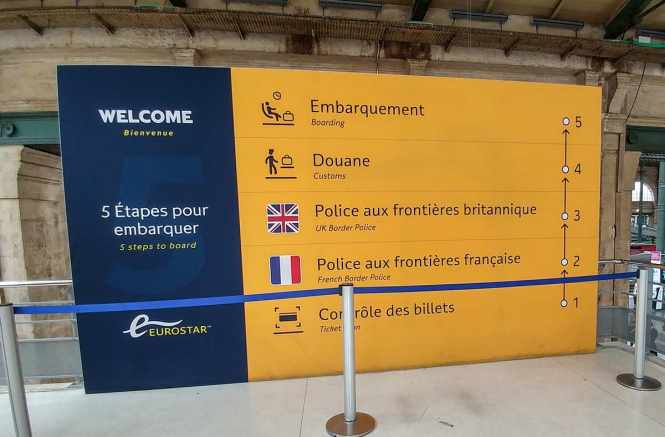 On the left of the check-in lanes (enlarged in photo below) is the Eurostar ticket office, just past the beginning of the blue-cordoned check-in lanes. 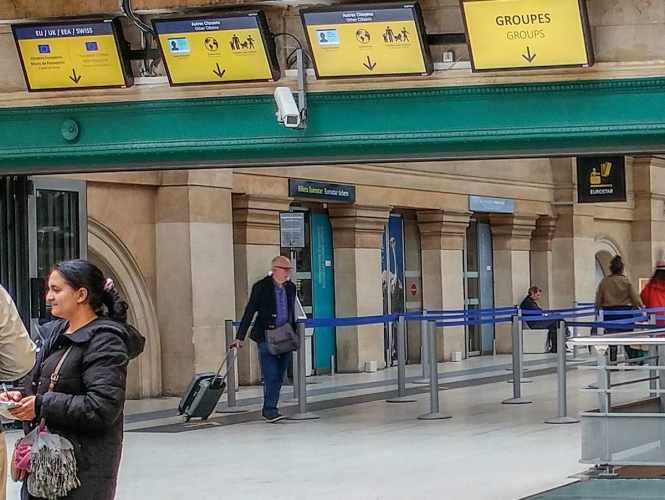 If you haven’t collected / printed your Eurostar tickets yet, you can do so in the ticket office and get help printing tickets in-person (that may be subject to a fee).  Have a print-out of your ticket confirmation email (with the ticket reference number) plus a passport to retrieve your tickets in-person.  At the end of this walkway is the Eurostar entrance. Non-EU citizens will need to fill out a declaration card for UK Immigration before you enter.

Traveling London to Paris by Eurostar, the arrivals area of Gare du Nord is what you will see after exiting the Eurostar train area: 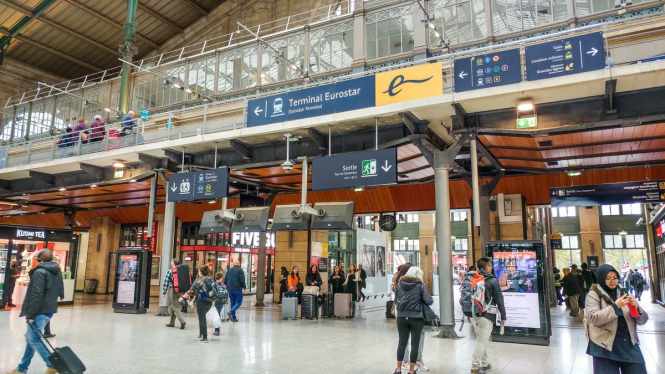 This is facing south east towards the front entrance of Gare du Nord on rue de Dunkerque.  Just to the right of this area, in front of train lane #3 are stairs and escalators down to Baggage/Luggage Storage inside Gare du Nord.  Centre middle is an overhead blue sign pointing left towards the Paris Metro 2, 4, 5 and Paris RER B / D / E trains located two levels down from street level.  There will be two sets of stairs leading one level down just left of this scene.  At the bottom of the first set of stairs will be several whiteBilletterie Ile-de-France ticket vending machines where you can buy Metro, RER and Transilien commuter train tickets.

The signs for Paris Metro and Paris RER in Gare du Nord will point towards the eastern side of the train station. (After disembarking Eurostar and walking to the head of the train, the Metro and RER trains will be off to your left.) You’ll need to walk a fair ways (about 5-7 minutes) to transfer from Eurostar to the Paris Metro / Paris RER area. Both Metro and RER trains are located below ground at Gare du Nord.

Paris Metro/RER ticket vending machines are found both at ground level and below ground level throughout Gare du Nord. The machines will look like this: 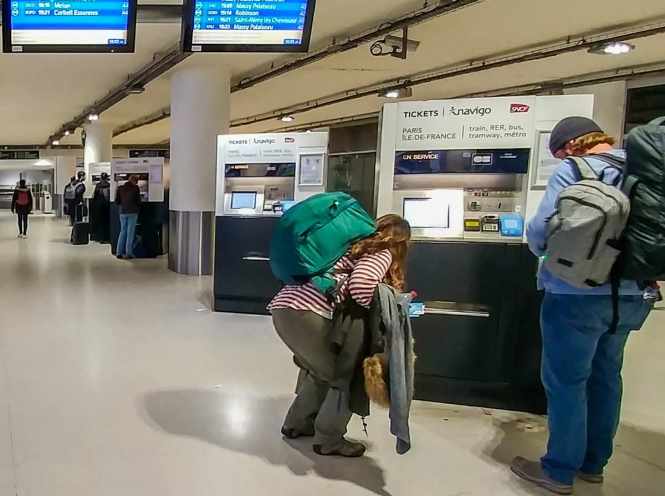 Traversing Gare du Nord from East to West you’ll walk towards Paris Metro and RER entrances. This will require you to descend a level by stairs or escalators. You’ll be on sublevel -1 now. You’ll first come across a Paris Metro ticket office and Metro ticket vending machines. 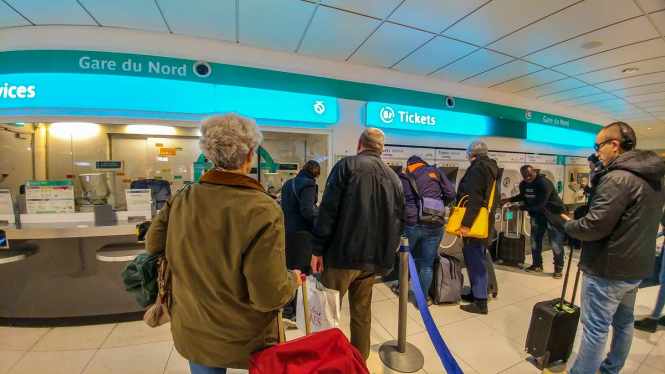 Walking further east you arrive at entrances for Metro 4, then Metro 5. Turning a corner left (heading towards the north east corner of Gare du Nord now) will lead you towards the entrances for Paris RER B and RER D, plus a walkway towards RER E. (See photo below.) 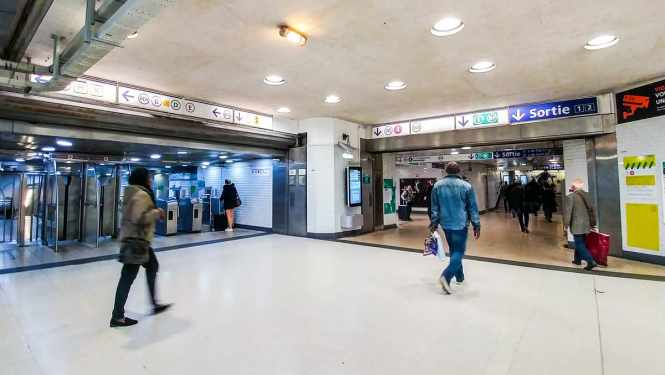 Visible is another overhead sign pointing towards Metro and RER trains with an airport symbol signifying the RER B train service from Paris to CDG Airport as well as Orly Airport to the south. 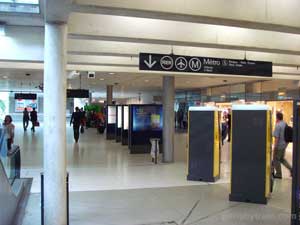 Here’s another photo of the same hall, opposite side.  In the distance you can see several green Billetterie Ile-de-France green ticket vending machines.  These sell both RER and Metro tickets trains (Billet Ile-de-France, Paris Metro Ticket t+) including carnets and can recharge Pass Navigo / Découverte with Carte Orange (although they do not sell new cards). Continuing down this hall leads towards Metro lines 4 & 5 and RER B, D, and E. 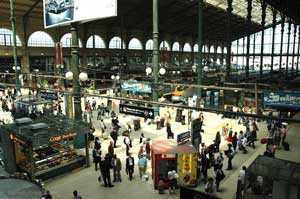 The above is a photo of the western half of Gare du Nord station from the Eurostar level overlooking train lanes/platforms 1-13 (voie in French) for Eurostar and Thalys trains arriving from London (Londres), Brussels (Bruxelles) and German cities. Near the center of the photo is a sign reading Reseau Ile-de-France RER with an arrow pointing to the east side of Gare du Nord station. This is the direction of the RER B, RER D, RER E platforms underneath Gare du Nord, at sublevel 2. 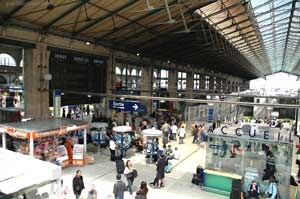 Near the middle of the photo below of Gare du Nord main train lines atrium you can see a blue rectangular sign reading “Metro” with RER and Metro symbols.  Follow those signs to get to the RER B, D and E train lines as well as Metro 4, 5.

Photo of the eastern half of the Gare du Nord station facing north, showing the departures board on the left, train lanes (voies) 14 and up, used for TGV trains and Ter (Ile-de-France) trains. At bottom right is an information booth with an ACCUEIL (Welcome) sign along the top. Beyond the Departures Board, on the other side, are more train lanes for Thalys (high speed trains from Paris to Brussels, Belgium, to the Netherlands and Germany) and Eurostar (high speed trains from Paris to London). 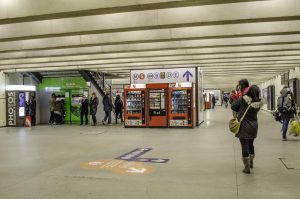 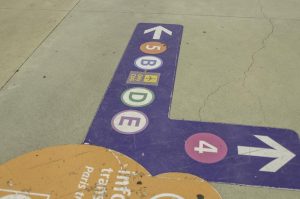 East (looking right) of this position is the large open atrium leading to the RER B, D, E lines and Metro line 4 and 5 on sublevels 2 and 1. 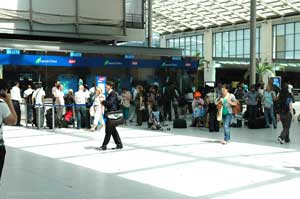 This is a photo of the eastern atrium at Gare du Nord with a Transilien (Ile-de-France) ticket window selling tickets for Ter and Transilien trains traveling outside of Paris, but within the Ile-de-France. Further east (looking right) is the RER/Metro portion of Gare du Nord. 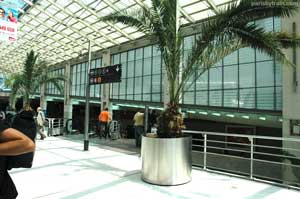 Photo from just above and west of the RER/Metro lines at Gare du Nord along the Eastern edge of the station. Here you can see a sign for RER lines B, D, and E plus Metro lines 4 and 5. 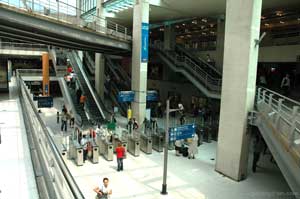 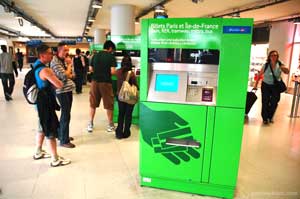 A photo of ticket vending machines at Gare du Nord within the RER/Metro section of the station. These machines are used for buying individual Metro/RER/Bus/tramway tickets (Ticket t+), carnets (books of ten or twenty Ticket t), and also tickets for train destinations within Ile-de-France on Transilien or Ter trains. Remember that most non-smart-chip credit cards will not work with these machines, so use Euro coins if you have them. These machines can also charge up Pass Navigo / Navigo Découverte cards with Carte Orange week or month “subscriptions” (abonnements) using the Navigo slot. 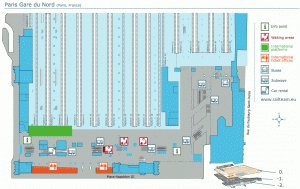