The table below provides an example of typical last RER Train from Disneyland to Paris (is 12:25 a.m.) on the RER A train line and first train from Paris to Disneyland (is 5:18 a.m.) in the morning (from Chatelet les Halles station).

How to Read First / Last RER A Train Timetable

To find the last RER train from Disneyland Paris (12:25 a.m.) back to city, start at the bottom right of the below table. The right most column is the Last Train column, listing last departure times at RER A stations along the train line. Marne la Vallée-Chessy is the Disneyland station, on the very bottom row and shows the last train time as 0:25 (12:25 a.m.). The times listed moving up the Last Train column on the right side show times the 0:25 RER Disney train will depart from each following station as it travels towards Paris. The RER A train timetable below shows the 0:25 (12:25 a.m.) last train departing Disneyland would reach Chatelet les Halles in Paris at 1:03 am.

The vertical line from Boissy-Saint-Leger to Fontenay-sous-Bois shows the 0:25 train will not stop at these stations (where are on a different branch of RER A train line.) 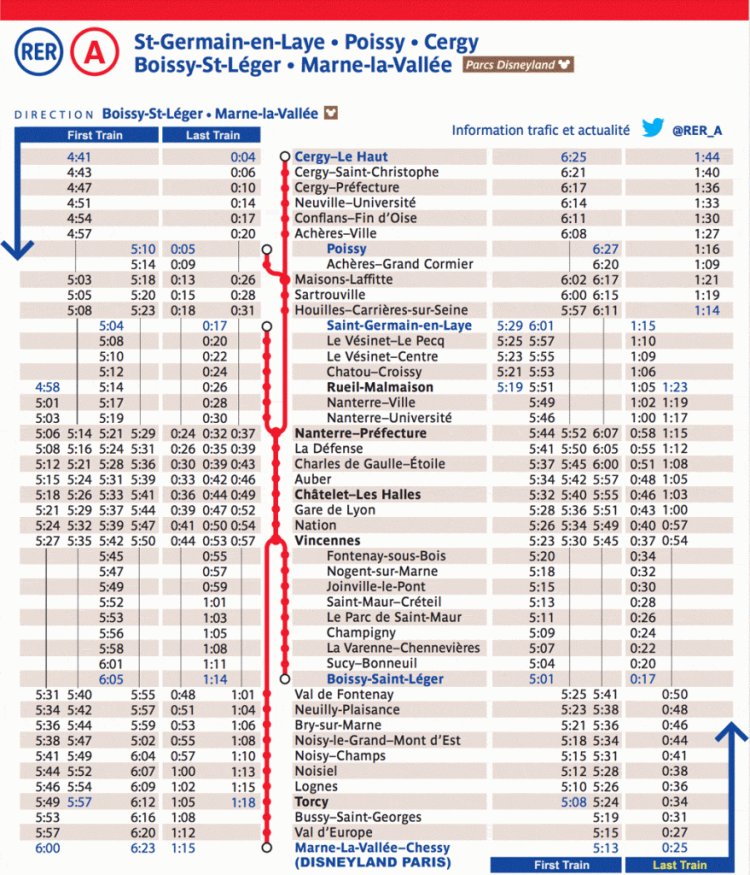 The second leftmost column above shows typical last train Paris to Disneyland times, useful if you are staying at Disneyland hotels and are visiting Paris. The sample listed for last trains times from Paris to Disneyland are at 0:36 a.m., 0:44 a.m., 0:49 a.m. from Chatelet les Halles station in Paris. Keep in mind the times listed above are only examples and may be different on your day of travel. Give yourself at least 5 minutes of safety margin ahead of the times listed if you want to be sure to catch the last trains to/from Paris & Disneyland.

RER A timetable for Paris to Disneyland trains

RER A Schedule To Paris from Disneyland

Use the following RER line map to find what stations are along the RER A line between Paris and Disneyland, showing all possible Metro and RER connections at each station along the RER route, as well as wheelchair accessible stations.

Paris RER A line map 2020 with Stations, Zones, Interchanges to other RER and Metro Lines (PDF)

Other Destinations on RER A

Popular destinations along Paris RER A: