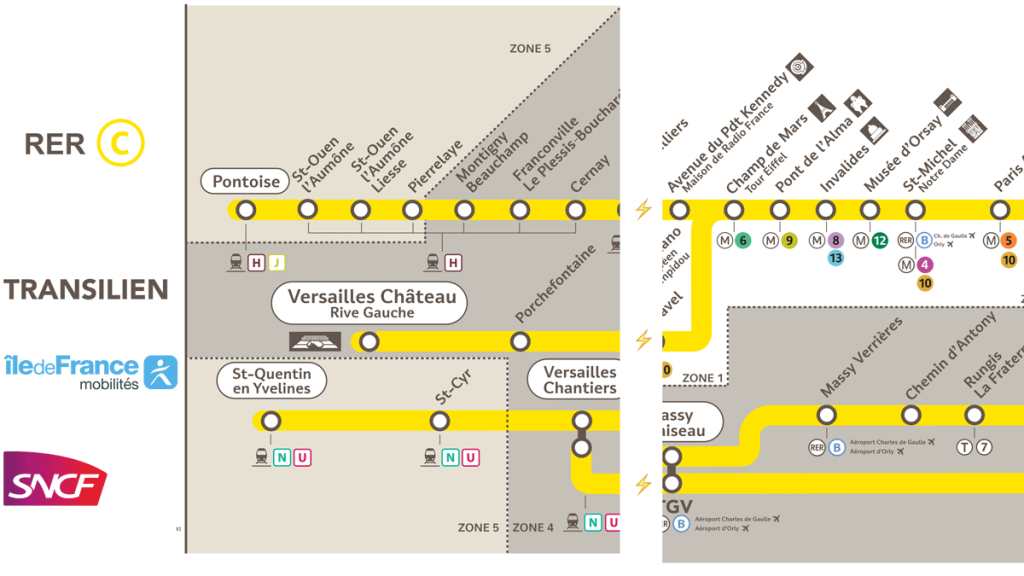 To get from Paris to Versailles by train you can take a “RER C” train from central Paris to within 5 minutes walk of Chateau Versailles, ending at station Versailles-Rive Gauche.

Start your trip by going into any Paris Metro/RER station that you find around the city, which will be marked with a blue sign with an M or RER surrounded by a circle. From time to time you’ll see the metro marked only by the old style art deco Metropolitan signs. Below is a photo of a Paris transit station that is both an RER and Paris Metro station. 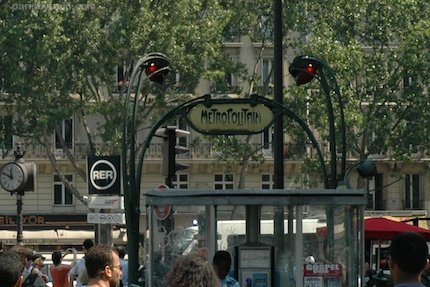 To get to Versailles, you’ll need the RER C train line, the yellow line that serves the western half of the Parisian suburbs.

To take a RER C train from Paris to Versailles you’ll need to buy a Paris – Versailles Rive Gauche RER train ticket, like the one shown below, that costs 5€ as of June 1, 2022 (or a Zone 4 pass, more on that later).

Do I Need a Metro and RER Ticket?

Ticket prices for Paris to Versailles train (Versailles Rive Gauche to be exact) will be the same regardless of where you start within Zone 1 (see a Paris transit fare zone map), with transfers on Paris Metro included on your RER ticket; You don’t need a separate Metro ticket, even if you start your Paris-Versailles journey at a Metro station. Any RER train station or Metro station inside central Paris (within the Blvd Peripherique ring road) is considered to be in Zone 1.  Again, see the Zone Map to check your starting station is within Paris zone 1.

Simply buy a Paris-Versailles Rive Gauche RER ticket at your starting station, Metro or RER, and use that RER ticket as if it was a Metro ticket to pass through Metro turnstiles/fare gates if you’re beginning your journey on Metro.

At the ticket window or guichet [Gkee-Shay] don’t panic. There’s a 50/50 chance the worker will speak English quite well and if not, they’ll understand “Chateau Versailles” [Shah-Tow Vher-Sigh]. Normally the Metro staff will ask you whether you want a return ticket, by asking “Aller Rétour?” [Alleh-Ray-Tour] (or by making hand signs holding up a finger or two fingers). A return ticket is simply two one-way tickets. Each ticket is currently ( as of March 1, 2022) 5€ or double that for a return trip. Tip: most credit cards will work at the ticket window nowadays but it doesn’t hurt to have cash on hand in case it doesn’t.  And 50 Euro notes aren’t especially appreciated either as it will clean out the ticket seller’s change till. Small bills or coins are better.  I’d recommend buying Aller-Rétour return tickets to save time lining up again in Versailles.  Note that RER train tickets don’t have an expiry date; you can use them at any time in the future, not just the day you bought them. 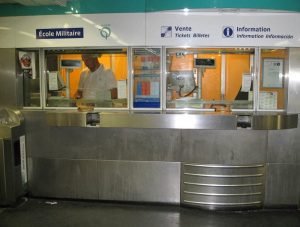 If you’ve got a day pass like Navigo Jour / Ticket Mobilis that’s good for at least Zone 4 or week pass like Navigo Decouverte (by default good for Zone 5), you don’t need to purchase a separate Paris – Versailles ticket since Versailles is in Zone 4.  And finally, if it wasn’t clear already regular Paris Metro or Bus tickets are not valid for travel to Versailles.  You must buy a Paris-Versailles Rive Gauche RER ticket.

Where to Board Versailles Trains

After you buy Paris-Versailles train tickets you’ll use them to get past the turnstiles and begin your journey towards the RER C line.  Keep your ticket handy:  You’ll need your ticket to exit after arriving at Versailles Chateau station!  Here’s where a Metro map to see where you are in relation to the yellow RER C line is very helpful.

Many stations throughout Paris serve several different metro lines and RER train lines all within the same station. This means a single station can have several vertical levels plus many different platforms going in opposite directions. This may sound confusing, but it follows a pattern that you’ll quickly master: All RER lines are letters, A to E, all Metro lines are numbers 1 to 14. All lines have a terminus station, i.e. the last station on the line. Every RER train and Paris Metro platform will mark which line you’re on and which direction the train is going, which is the terminus station. If you are not already at a station which serves the RER C line, play snakes and ladders with the Metro/RER lines on the map to see how you can get to the closest RER C station.

If you happen to be at a RER yellow-line station such as St. Michel/Notre Dame, Champ de Mars-Tour Eiffel, Musee d’Orsay (see the entire RER C line map) then you’re already on the RER C line and transfers are (likely) unnecessary.  If you’re starting from a Metro station, you’ll need to find a Metro route that intersects with a yellow-line RER C station and make the necessary Paris Metro to RER transfers. Take a look at a Paris Metro map and plot your route onto the RER C line & to Versailles Rive Gauche. 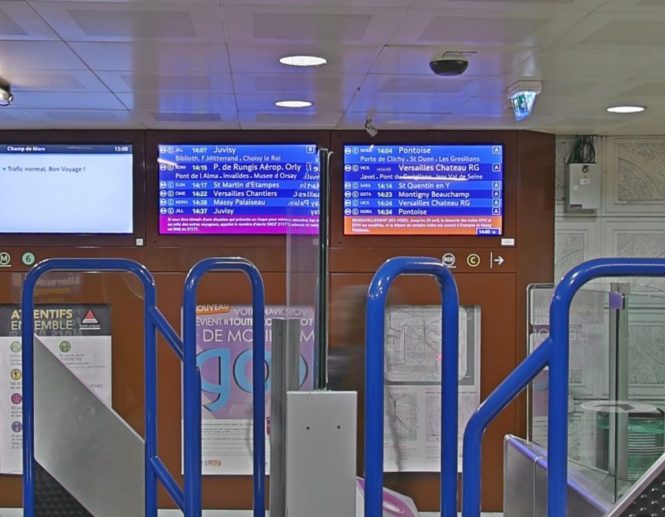 The key to finding the right RER C train to Versailles inside an RER train station is to check the display screens and find trains heading to Versailles Chateau RG (which stands for Rive Gauche).  On the photo below you’ll see the right hand screen, second line shows:

VICK is the “mission” for the train which tells you where it’s headed and which stops it will make along the way.  You can find out all the stations that will be served by a VICK-mission Versailles Chateau RG train by looking at a Paris RER C train schedule.

Versailles Chateau RG is the final destination of the train, which is the train station closest to Versailles Palace and the one you want.

The letter |A| tells you which platform to use to board the Versailles Chateau RG train.  And finally the names underneath the final destination: Javel, Pont de Garigliano, Issy Val de Seine are a sample of popular train stations that will be served by this VICK train on its way towards Versailles. 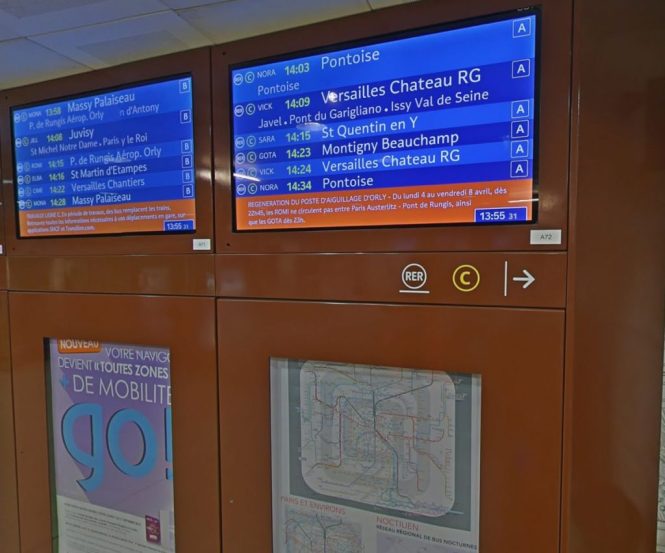 Other names on the display panel are for other terminus stations along the same RER C line. In the above example, there are RER C trains with direction/terminus station of Pontoise, Saint-Quentin-en-Yvelines, Versailles Chateau Rive Gauche, and Montigny Beauchamp, all departing from the same train platform, traveling on the same RER C train line. On the left hand screen you’ll also see Versailles Chantiers, which is easy to confuse with Versailles Chateau RG, so double check you’re using the right train platform before boarding the train.

Once you’ve arrived at the RER platform you’ll see the same train destination display overhead show the same information.  Double check that Versailles-Chateau RG is shown the display screen above you. If the name is not on the board, check the other side of the platform, which is going in the opposite direction… you may have made a mistake and chosen the wrong platform.

When the train arrives, the doors will not open automatically; Someone on the train, or you, must press the green or silver button on the door to open it.

Once on the train, if you’ve taken the right train, you won’t need to keep track of the stations since Versailles Chateau will be the last station on the line and everyone will be getting off.  Here’s where keeping your RER ticket comes in handy as you’ll need to insert it into exit turnstiles / fare gates to exit the train platform and find your way to the street. 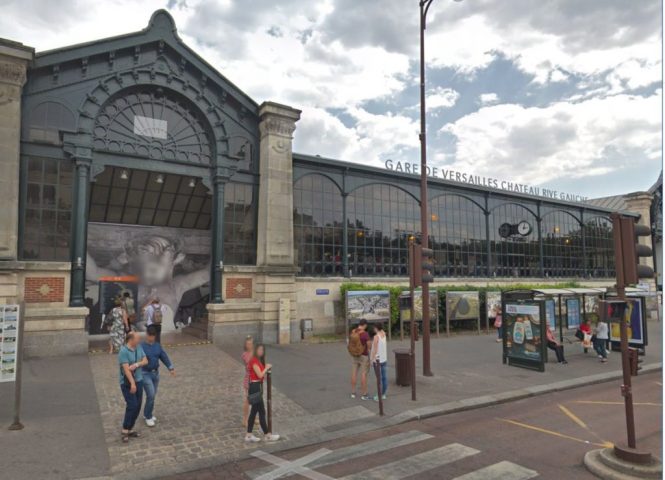 After arriving at the Versailles Chateau Rive Gauche station, look for blue “Sortie” signs which mark exits for the station. Eventually each of them will have a name marking what street it gives access to. On occasion a landmark or sight such as Tour Eiffel or Chateau Versailles will be marked on the exit sign as well, highlighted in beige.

Upon exiting onto the street you are now on Avenue du General de Gaulle. With the train station at your back, look right; this is the direction you want to walk, towards Avenue de Paris. As you walk towards the first intersection you should see the Marie de Versailles (City Hall of Versailles) on your right with a large clock on the grass bank. 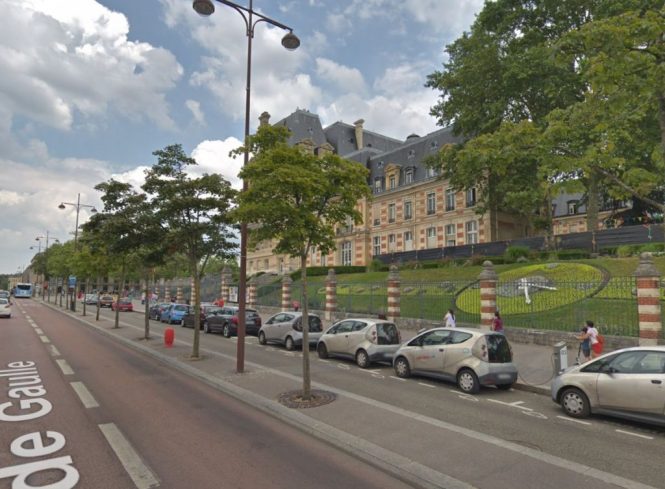 At the intersection, turn left and walk down the tree-lined avenue. This is Avenue de Paris and leads right to the front gates of the Palace of Versailles. 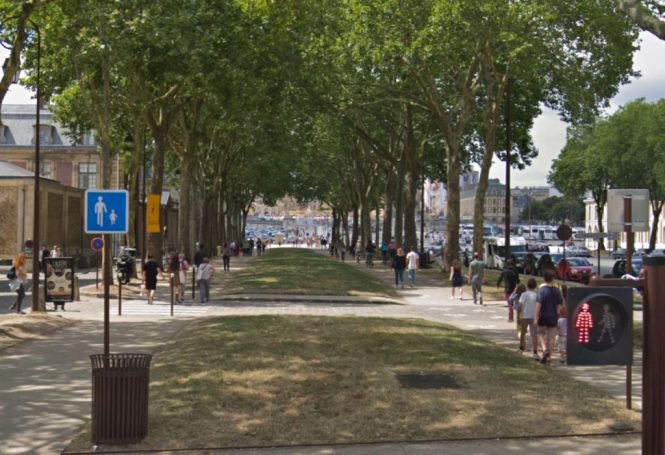 Paris to Chateau Versailles by Train was last modified: July 15th, 2022 by Ben

10 thoughts on “Paris to Chateau Versailles by Train”