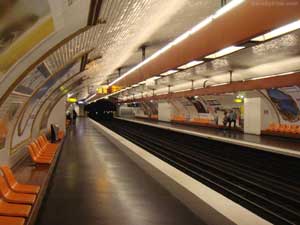 The Parisian subway is known as the Metro, short for “chemin de fer Métropolitain” [metropolitan railway].  The network of underground rail lines has 245 stations scattered throughout central Paris’ 20 “arrondissements” [districts].

During your journey, keep your ticket with you until you arrive at your destination station and pass through the exit gates or turnstiles.  “Controleurs” [ticket inspectors] may stop you at any point during your journey to ask to see a valid ticket or pass.  Failure to provide a valid fare will result in a fine of €35, payable on the spot through credit card.

Paris Metro stations are mostly located underground with a few above ground due to local geography. Entry into the Metro stations is free up until the turnstiles which mark the area from which you must have a valid transportation ticket or pass. Some station entrances are unmanned, having no ticket window nor ticket vending machines, only turnstiles which accept tickets and smart card passes (Pass Navigo) for entry.

Metro lines are numbered from 1 to 14, each a different color, with two “bis” [b or secondary] lines making 16 in total.

Signs within Paris Metro stations mark the way to train platforms on a given line, in a given direction. Metro lines are signified by the letter M within a circle.There are several Metro stations that serve multiple lines in various directions. This causes some stations to have several vertical levels accessible sometimes only by stairs, but often with escalators and sometimes with elevators for extremely deep stations.

As you make you way toward the line platforms within a station, stairs often descend or ascend onto the either side of the rails.  Each stairwell is often marked with a detailed Metro line sign showing number, direction, and stations that will be visited as the train travels toward the terminus.

Exits from Metro stations are marked by blue “sortie” [exit] signs and often note the street or area they give access to. 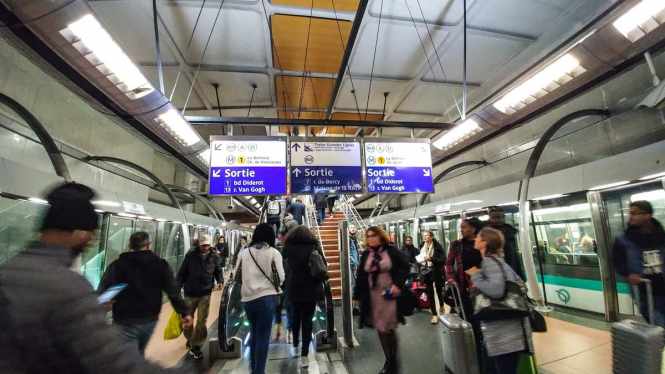