The Orlybus Orly Airport Bus travels between Orly Airport Terminal 4 and Paris Denfert-Rochereau in Paris in 25-30 minutes at a cost of 9.50€.  Read on to find out:

At Orly Airport, Orlybus makes two stops, first at Orly 1-2-3 (a combined stop serving all three terminals) and a 2nd and final stop at Orly 4.

The Orlybus then departs Orly airport for Paris only from Orly 4. Orlybus will not pick up passengers at Orly 1-2-3 when going to Paris.

Connections to Orlybus in Paris at Denfert Rochereau 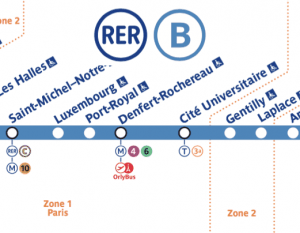 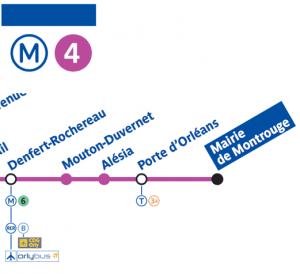 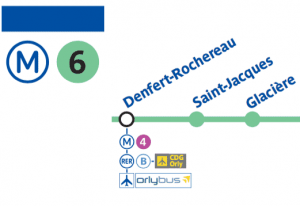 Where is Orlybus at Orly Airport (ORY)?

Orlybus to Paris departs ORY airport from Terminal 4 only.  You can find Orlybus at ORY Airport Terminal 4 outside door 47d at bus stop #5.

If you land at Orly Airport terminal 1, 2 or 3, you will have to transfer to Orly Terminal 4 to catch Orlybus to Paris.  Transfers from Orly terminals 1, 2, or 3 to Orly 4 can be done by walking or taking the Orlyval train between Orly 1 and Orly 4. The walk from Orly 3 to Orly 4 is about 8 minutes long. Orly 3 is the closest ORY terminal to Orly 4, but requires walking outside underneath a covered walkway during construction of the hallway that will join the two terminals. Walking from Orly 1 to Orly 4 is about 15 minutes. It’s faster to take the ORLYVAL shuttle train from Orly 1 to Orly 4. The ORLYVAL is free of charge when transferring between Orly terminals.

Below is a photo of Orly Terminal 4 bus station, with the Orlybus at Bus Stop #5 visible at center top right furthest away, Paris bus 183 to Porte de Choisy in dead center at Bus Stop #4 and the Disney Magical Shuttle to Disneyland Paris in yellow/orange in the bottom right at Bus Stop #3. 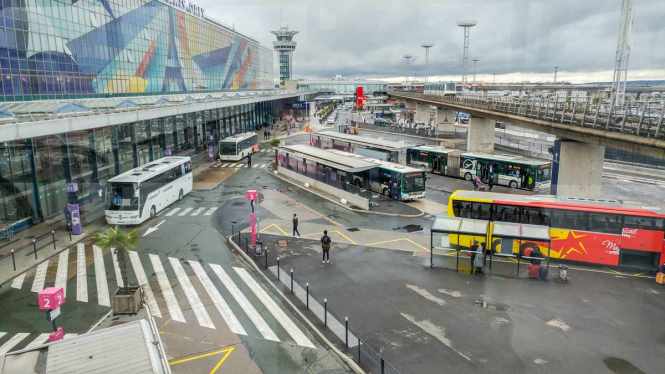 You can buy OrlyBus tickets at several ticket vending machines at bus stop # 5 or from the staffed ticket window at Bus Stop #5 outside ORY Airport Terminal 4 door 47d, visible in the photo below: 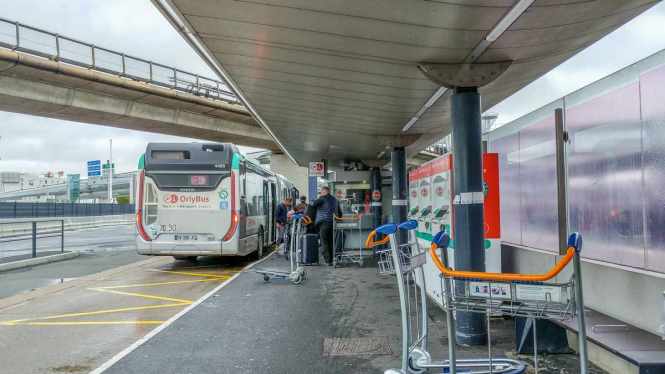 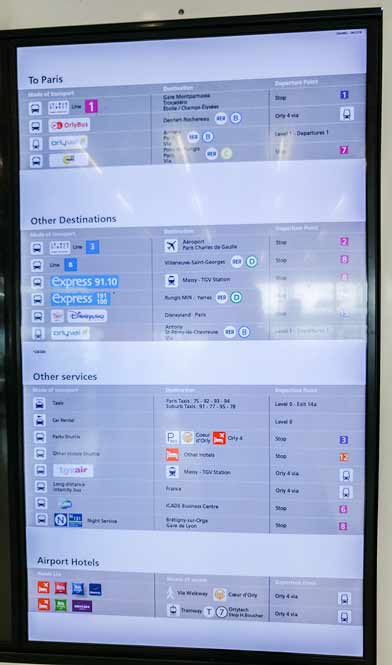 Some details on where to catch Tram 7 from Orly Airport Terminal 4 (near Parking 3 garage), OrlyVal train (entrance & ticket office near Sortie/Door K) and OrlyBus from island 3 at the bus station (“Gare routière“). 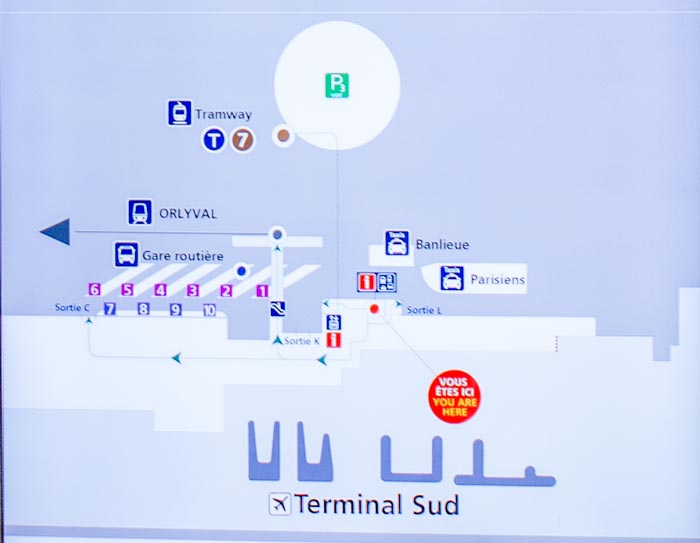 An Orly Airport bus ticket vending machine is shown below.  Note the Orly airport bus price has increased to 9.50€ as of Nov. 1, 2019.  Although the particular machine below doesn’t have a slot for accepting Euro cash notes, some Orly bus ticket machines will accept cash notes.  Other forms of payment accepted include debit card, Mastercard and Visa.  All cards must use chip + PIN technology to be accepted. 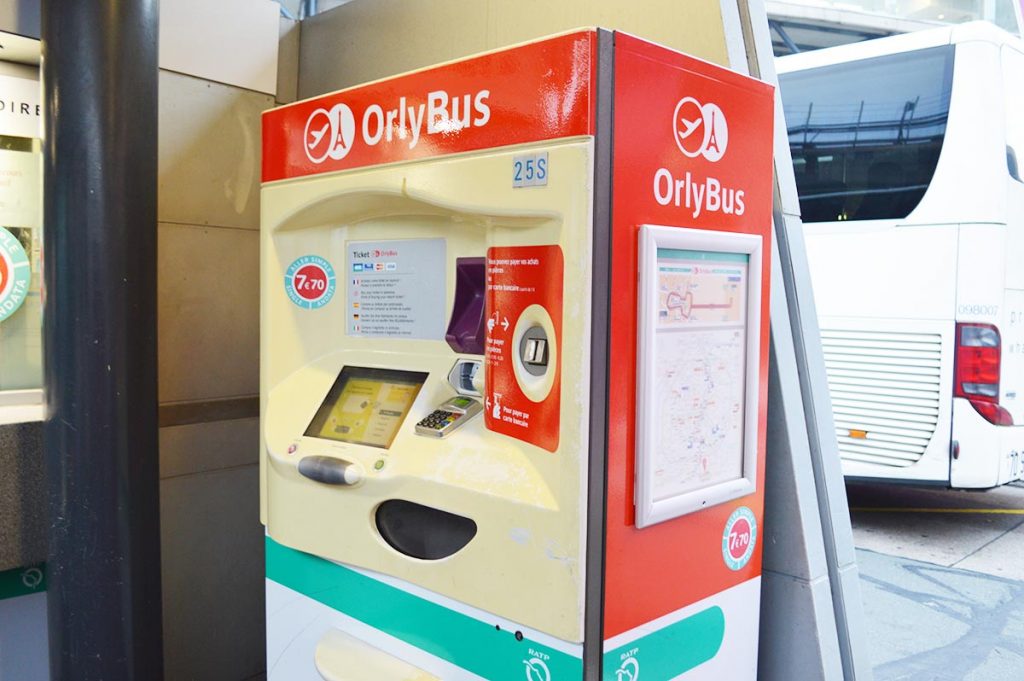 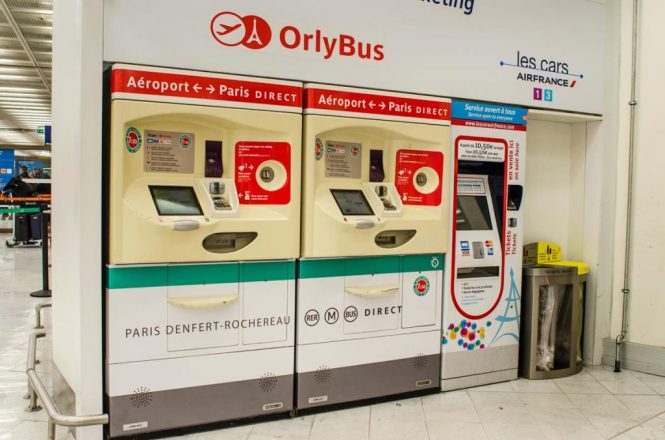 A photo of the “Orlybus” Orly Airport Bus stop in Paris at Denfert Rochereau Metro stop.  The Orlybus red logo is visible on the bus stop. 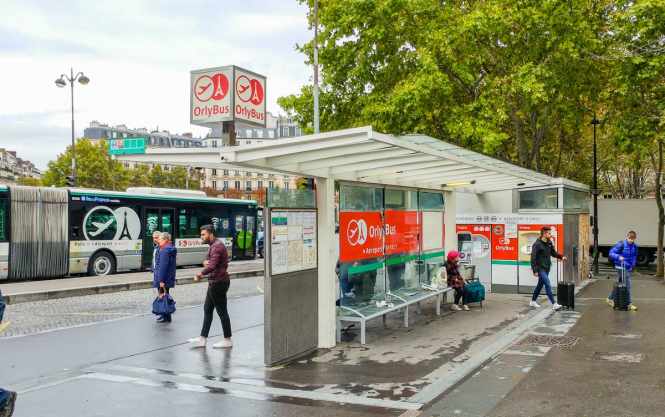 Orlybus Ticket machines are available at the bus stop to help speed the boarding process. If you’d like to take advantage of the Navigo Easy Orlybus ticket discount, buy your Navigo Easy card & load your Orlybus ticket at the ticket window inside the Denfert Rochereau station visible in the background of the photo below: