Direction => Antony station (by OrlyVal), then Mitry – Claye or Aéroport Charles de Gaulle (by RER B)

The fastest way from Orly Airport to Paris is by train.

After arriving at Orly Airport, take the OrlyVal train from either Orly South Terminal or Orly West Terminal to Antony station, then transfer to RER B train to Paris. The RER B train to Paris will be traveling in directions of either Mitry-Claye or Charles-de-Gaulle (often shown as Aeroport Charles de Gaulle 1 & 2). Both of these Orly airport train directions will pass through Central Paris. The RER B train from Orly will make stops at Central Paris train stations of:

… in that order, from South to North through Central Paris.

To find the OrlyVal train station entrance at Orly Airport, look for signs reading ORLYVAL (some signs may also show “Airport Shuttle”).  Below is a photo of the Orly West terminal OrlyVal train entrance.  (The big Christmas ornaments are there only during the holidays).

A photo of the OrlyVal Ticket Office and OrlyVal Ticket Machines at Orly West Terminal are below.  Notice you can take the Orly train to Orly Sud (South) terminal in one direction and OrlyVal Train to Paris in the other direction.  (Taking Orlyval between Orly terminals is free of charge.)

The ticket machines at the OrlyVal ticket office take Euro coins, credit and debit cards using chip + PIN technology.  To purchase Orly train tickets in Euro cash, use the OrlyVal ticket booth visible on the left of the photo below staffed by vendors who will help you (or you can try to find the OrlyVal ticket vending machines that take cash, a few do, see second photo below).  Although you could potentially purchase a Navigo card from the ticket booth, the Navigo passes are not valid on the OrlyVal train.  OrlyVal is a short shuttle train owned & operated by a third party that is not part of Paris city transportation group (known as the RATP).  For whatever reason the company operating OrlyVal do not have an agreement with RATP to allow RATP transit passes to work on OrlyVal.  Thus the only pass valid for OrlyVal is Paris Visite ticket and only the 5 Zone (Paris Visite is also available in a 3 Zone version, but Orly Airport is in Zone 4). 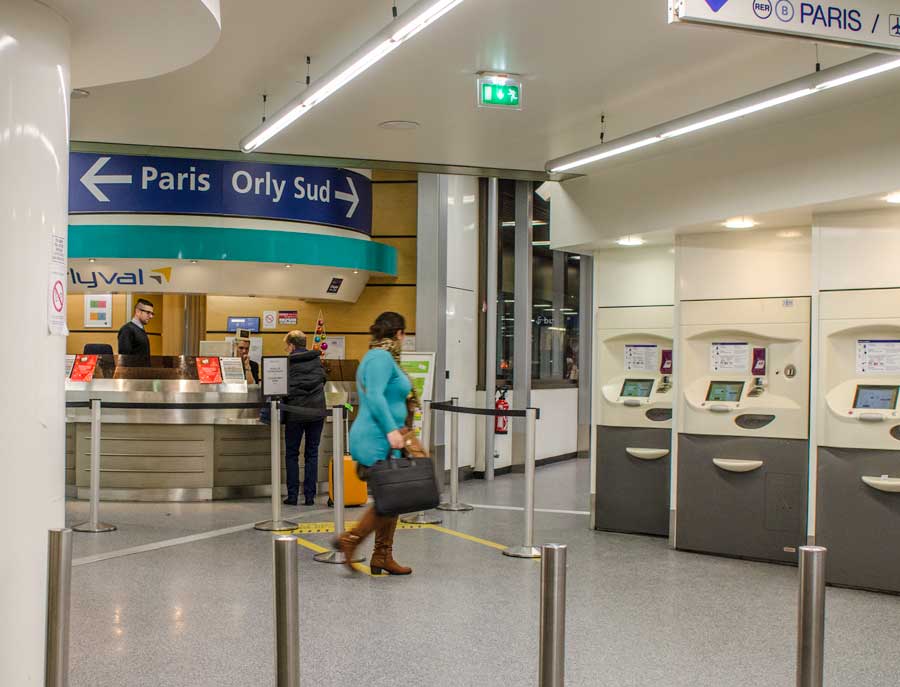 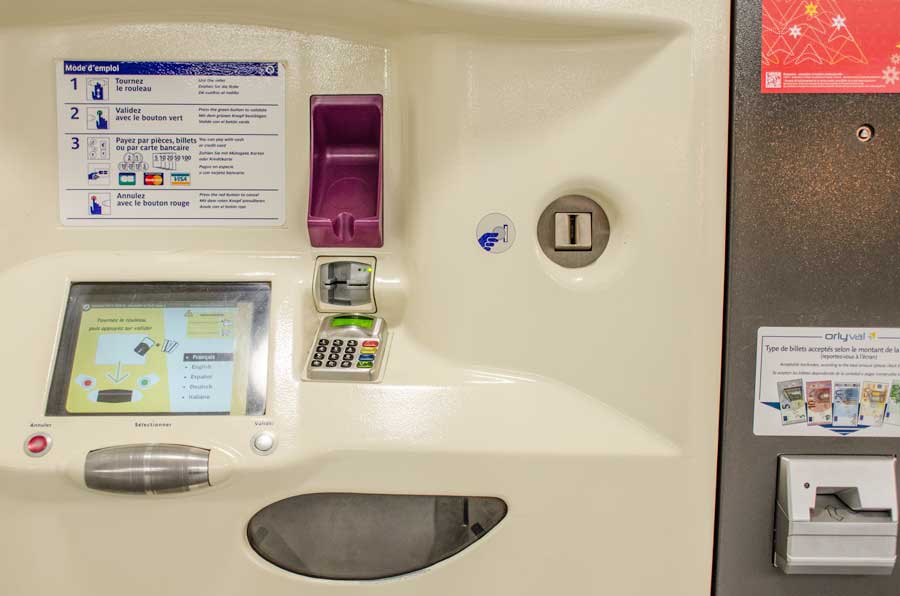 The OrlyVal train towards RER B Paris city train line is quick & short, only one stop from Orly West (Ouest) and two stops from Orly South (Sud) to Antony station.  A change of trains is required once you arrive at the OrlyVal terminus (last) station: Antony. 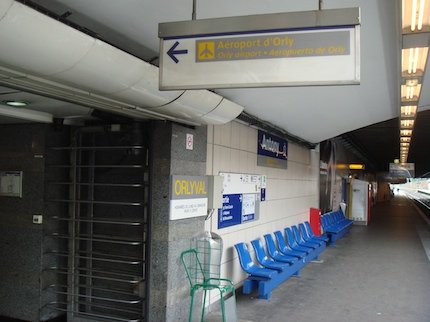 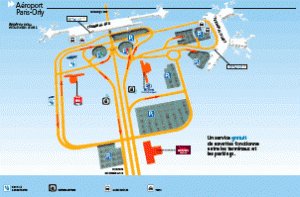 Keep in mind that the Pass Navigo Découverte for Paris is not valid for the OrlyVal train. If you have a Pass Navigo with at least 4 zones purchased, it would be best to purchase a single ticket for the OrlyVal train just to Antony at a cost of 11€ and from there use your Passe Navigo for the RER B line to Paris. A single ticket (a billet Ile-de-France) for the entire journey between Orly and central Paris will cost 14.10€ (adult) and 6.90€ (children).

The cheaper option, avoiding the OrlyVal train fee altogether, would be to take the RER C line from Gare d’Austerlitz towards Massy Palaiseau getting off at station Pont de Rungis – Aeroport d’Orly and then taking the Aeroport de Paris shuttles to the Orly terminals.

To see all travel options, prices and travel times between Orly and Paris, see Transportation between Paris and Orly Airport.