The Eurostar to Disneyland® Paris train, for as little as 69£ from Oui.sncf (St. Pancras –> Disneyland, offers high speed train connection service between London and Disneyland Paris on the eastern edge of the city (accessible by Marne La Vallee-Chessy station), seven days a week.

This article discusses how to find Eurostar Disneyland Paris train tickets and how to catch this train.

The Eurostar train (sold thru Oui.sncf) to Paris Disneyland train schedule has the first departure leaving London St Pancras station at 06:50 (arriving 11:50 Paris time) and last daily departure at 17:04 (arriving 21:26).  Note that only one train per day is direct (no connections) which is the 10:14 from St. Pancras.  All other Eurostar London – Disneyland Paris trains on Oui.sncf have a connection at Lille where you must change trains to a TGV train to travel from Lille to Marne La Vallée station. 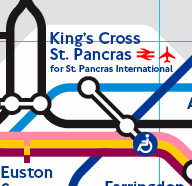 Trains on the London side leave from the new St Pancras International station accessible via King’s Cross tube station (click here for a London Tube map). 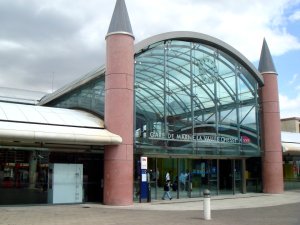 Most trains serving this route are not direct, with a connection made in Lille on the French side of the Channel. Eurostar trains from Oui.sncf make the London to Lille leg of the journey in 1 hour 27 minutes, then a change is required to a French TGV (Trains à Grande Vitesse) train which completes the journey to Marne La Vallée–Chessy in just over an hour. Total travel time on connecting train voyages is between 3 to 4 hours depending on the length of the layover in Lille.

Tickets can be purchased online at Oui.sncf. Be sure to search for a return trip, rather than two one way journeys, as the prices for one way tickets can be much more expensive.

When using Oui.sncf to find tickets and schedules, search for “London St Pancras” as the “From” location and “Disney” as the arrival location, choosing the first suggestions that come up.

The most rapid itinerary would be a departure from London at 09:10 and a return train from Disneyland at 18:02, both of which are direct trains.

After selecting your itinerary on Oui.sncf you’ll be asked to choose a method to receive your tickets: either by mail or through automated ticket collection machines at St Pancras station. In general I’d recommend mail delivery to avoid any lineup or ticket collection machine headaches at the departure station. There is a small 2.25£ fee for having your tickets sent by Royal Mail. Picking up tickets at the departure station (St Pancras) is free if you don’t mind getting to the station a bit earlier to use the self-service ticket machines. A six letter reference code will be given to you when you complete your online ticket purchase. This code will be needed to collect your tickets from the automated ticket machines at St. Pancras train station.

For ticket collection via the automated machines, you must use the credit card used to make the purchase, and the booking reference number will be requested (sent to you via a confirmation email after completing your online ticket purchase).

Upon arriving at Marne La Vallée–Chessy TGV station near Paris, you’ll be only a few minutes walk from the Parc Disneyland gates. Below is the scene surrounding the train station (visible on the left).

Not visible in the photo, further off to the left, is the entrace gate to Parc Disneyland.