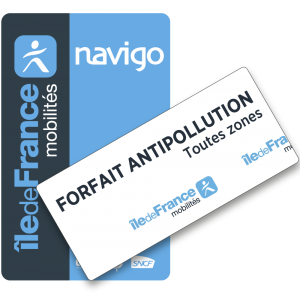 The Paris anti-pollution ticket/pass will cost 3.80€ for an all-day travel pass. It’s quite a good deal considering a single-use RER B ticket to CDG would be 11.45€ normally. With the Paris antipollution pass you could do round-trip to CDG airport / Disneyland Paris and pay only 3.80€.

The Paris antipollution travel pass is only available for sale when vehicle traffic and therefore air pollution surpasses some (mysterious) limit. The antipollution ticket isn’t normally available and there is no published list of traffic / pollution limits that I could find which predicts when this limit will be surpassed. I would imagine the air quality measuremeant also depends on atmospheric conditions that could lead to a build up of more smog, particulates and other emissions in the region and hence trigger the sale of anti-pollution travel passes.

When Paris antipollution passes do become available they are sold from 8pm the night before the anti-pollution transportation day.  Availability of Paris anti-pollution tickets & the day they will be valid is posted / published by the Prefecture de Police (https://www.prefecturedepolice.interieur.gouv.fr/), by the Ile-de-France Mobilities website (https://www.iledefrance-mobilites.fr), and the Paris regional transit authority at https://www.ratp.fr.

Where & How to Buy

The Paris antipolution pass can be bought as a multi-use paper coupon ticket when you don’t have a Navigo card handy.

The antipollution “ticket” is a multiple-use paper coupon ticket just like a Paris Visite ticket or a Ticket mobilis day pass. You can buy the paper ticket antipollution pass from automated ticket vending machines using Euro coins (a few machines may also take small Euro notes) or European debit card or Visa/Mastercard credit cards and from Metro/RER/Transilien ticket windows. There are also many retail points of sale for transportation tickets at tobacconists, newspaper stands and cafés which display the RATP logo.

If you have a physical Navigo pass card already you may buy & load the antipollution pass directly onto your Navigo using any automated ticket vending machine with a Navigo card reader or at any Paris Metro/RER/Transilient ticket window. The Paris antipollution pass can be bought & loaded onto a:

If you’re already using either the Ile de France Mobilités app or the Bonjour RATP app, you MAY be able to buy & load the antipollution ticket/pass onto your phone and use the pass directly from your phone. I note “MAY” because support for ticket purchases on the two mobile phone apps (Ile-de-France Mobilités & Bonjour RATP) varies depending on whether you’re using iPhone or Android and which versions of iOS and Android you are using.

Android phone users (with at least Android version 6.0 and NFC hardware on the phone) may be able purchase antipollution tickets on their phone and use those tickets directly from their Android phone. iPhone users who have paired their Navigo card with their iPhone may be able to purchase and load their antipollution ticket onto their physical Navigo card, but they cannot use the antipollution pass directly from their iPhone. (This feature is not yet supported for iPhone.)

Note that as of August 2022 the antipollution ticket is only available for some Android phones with both NFC (near field communication) chips and Google Mobile Services installed. This means Huawei and Honor brand phones are currently not supported for Paris transportation ticket & pass purchases nor validation at fare gates due to restrictions on accessing Google services.

How to use Antipollution Pass

The antipollution travel pass loaded onto a Navigo or Navigo Easy card is used like a Navigo Day Pass, tapping the card against the purple reader areas of fare gates / turnstiles and validation terminals on trams & buses. See the Navigo page for more information.