How to get to Château de Versailles from Central Paris

Locate either train stations or metro stations in central Paris that will connect you to RER C, the yellow RER line. Listed below in the flowchart are all the RER C stations within Zone 1, their arrondissements and any connecting metro lines (ie. if you are closer to a metro station, you can hop onto any of the listed metro lines to get to the specific RER station). All RER lines fork and have several different end terminals, so you’ll have to pay attention to make sure that you’re on the right train. The terminus station to get to Château de Versailles is ‘Versailles Rive Gauche’ (listed as C5 on the RER map). 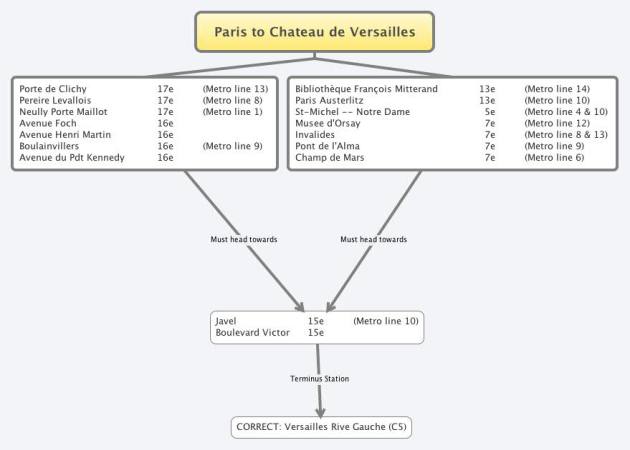 Flowchart: How to get from Central Paris to Château de Versailles via RER C

Between central Paris and Versailles, you need to take the RER C Line in a way which will lead you to ‘Javel’ station and later to ‘Porchefontaine’ station. Since the line forks, it will really depend on where you start to know how many stations away Javel and Porchefontaine will be. These stations will indicate whether you’re heading in the right direction to end up at ‘Versailles Rive Gauche’.

Example: If you start at Avenue Henri Martin, you’ll need to pass Boulainvilliers, Avenue du President Kennedy and then Javel, if instead of passing Javel you hit Champ de Mars it means you’re going the wrong direction. This is an easy mistake to make and if that happens, just get off at the station and look for the signs in the station which go towards the right direction. Make sure not to exit the station or else you’ll need to use a new ticket over a common mistake.

Once you arrive at ‘Versailles Rive Gauche’, Château de Versailles will take about five minutes to walk to.

Ticket t+ cannot be used for this trip. Versailles is within the Île-de-France region. The ticket t+ is only valid on RERs within the city of Paris (ie. Zone 1). Instead you’ll have to get a ‘Billet Origine-Destination‘ to/from Versailles-Rive-Gauche at 4,10€ per direction (price current as of January 2013).

Note: If you plan to use any other forms of public transportation in the day, I recommend getting an unlimited Mobilis pass for the day from Zone 1-4; you’d only need to take one more round trip to make it worthwhile in terms of cost (pass costs 10,85€).

During normal working hours, ‘Versaille Rive Gauche’ station has someone selling tickets who may speak a bit of English. Be prepared for the language barrier by having a map handy and the places you need to get to written down. 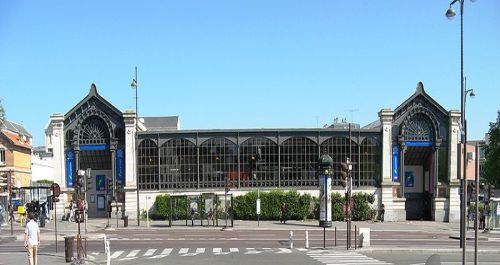 Otherwise, happy traveling! Getting to the station from Château de Versailles is just as easy, there’s clear signage to help you navigate back to the train station and then hop onto the RER C line to Paris and you’re set. If you’re feeling adventurous, you can always take the bus back too!

For more information, check out the ParisByTrain article: Château de Versailles by Bus.