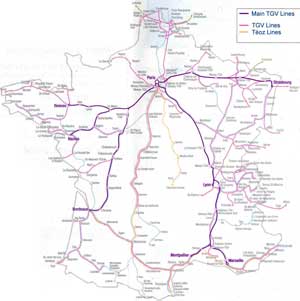 This TGV Map shows the main TGV destinations in France:

The principal France TGV routes shown on the TGV map include:

Many edge destinations such as Nice, Toulon, Montpellier have a portion of the TGV route run at regular speed on non-TGV specific train lines (which are less straight).  These parts of the TGV route are run at non-high speed which is about 110km/h.